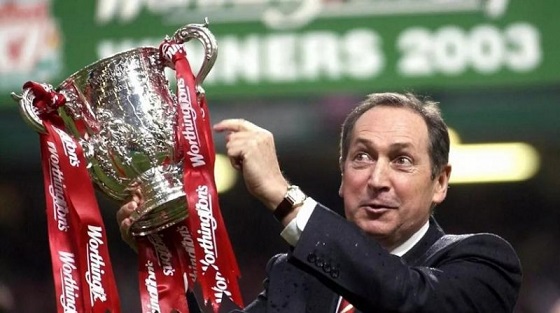 Gerard Houllier, the English teacher turned football manager who helped to rebuild Liverpool as a force in Europe, died on Monday at the age of 73.

French sports paper L’Equipe said Houllier died just a few days after undergoing another heart operation.
In his early 20s, Houllier spent a year as a teacher in Liverpool and stood on the famous Anfield Kop as a fan.

The connection remained throughout his career and when he returned in 1998 as manager, he was an instant hero.
Houllier spent six years in charge at Liverpool between 1998 and 2004, leading them to the UEFA Cup, FA Cup and League Cup treble in 2001.

After requiring life-saving heart surgery in the 2001-02 season, he returned to lead the team until 2004. He went on to manage Lyon and Aston Villa, resigning after suffering from heart trouble.

Liverpool said they were “deeply saddened” by the news and praised Houllier, saying in a statement on their website that he “successfully re-established the club as a modern force.”

The club said he left Liverpool in 2004 with “his legacy as a revolutionary and vital figure in Liverpool’s modern history enshrined and cherished.”

Tributes poured in from the world of football, with former Liverpool players Steven Gerrard, Jamie Carragher and Michael Owen among those to offer their condolences.

“Devastated to hear the news my former manager Gerard Houllier has passed away,” Gerrard wrote on Instagram. “I will never forget what this man did for me and my career. Rest in peace Boss. YNWA x.”

“Absolutely devastated by the news about Gerard Houllier, I was in touch with him only last month to arrange him coming to Liverpool. Loved that man to bits, he changed me as a person & as a player & got @LFC back winning trophies. RIP Boss,” defender Carragher wrote on Twitter.

Owen said: “Absolutely heartbroken to hear that my old boss, Gerard Houllier, has sadly passed away. A great manager and a genuinely caring man.”

Former Liverpool manager Roy Evans, who shared the job with Houllier when the Frenchman first arrived at Anfield, sait it was “incredibly sad news”.

“A gentleman I have the greatest respect for and what he achieved at Liverpool football club. Condolences to his family. RIP”,” he said on Twitter.

PSG and Aston Villa were also quick to respond to the news.
“The whole of the Paris Saint-Germain family would like to present its condolences to his family and loved ones,” PSG said.

“All at Aston Villa are deeply saddened to learn of the passing of Gerard Houllier, our manager during the 2010/11 season,” Villa said on Twitter. “Our thoughts are with Gerard’s loved ones at this incredibly difficult time.
And Manchester City manager Pep Guardiola sent his best wishes on behalf of his club.

“He was an incredible, lovely person when I met him at UEFA meetings or when we played Lyon, or when I met him as a player and manager,” he said on Twitter. “It’s sad news for all world football.”

Houllier managed Le Touquet, Noeux-les-Mines, Lens and PSG before stepping up to the national team as an assistant to Michel Platini.

After becoming manager in 1992, when France failed to qualify for the 1994 World Cup, he stepped down but remained as technical director and was widely praised for his role when the country won the World Cup on home soil in 1998.

Houllier remained popular with all his former clubs but it was at Liverpool where he was particularly loved, his connection dating back to when he first stood with the fans.

And as he said earlier this year, Houllier never forgot the bond. “They are really special,” he said. “I was one of theirs, don’t forget that.”