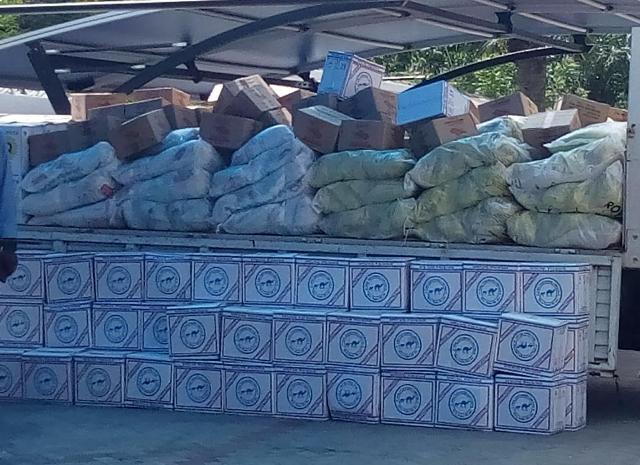 Former President John Dramani Mahama on Tuesday called on government to effectively liaise with local authorities in the locked down areas to ensure fairness in the distribution of food to deprived and vulnerable communities.

The stakeholders, he suggested should include; chiefs, Assembly members, Community and association leaders to ensure equitable and fair sharing of donated items.

Former President Mahama made this suggestion, when he presented a quantity of food items to the National Democratic Congress COVID-19 Team for onward distribution to vulnerable and deprived communities in the affected cities and regions.

The food would finally be distributed to 20, 000 households in deprived communities under the Greater Accra Region, Greater Ashanti Region, Tema and Kasoa.

A couple of weeks ago, President Nana Addo Dankwa Akufo-Addo banned all social gatherings and subsequently locked down the Greater Accra and Greater Kumasi Regions, Tema and Kasoa Metropolis and Municipality respectively.

To sustain and keep the vulnerable and deprived persons at their homes to avoid community transmission, government started supplying food to the deprived amidst complaints of discrimination and crowding.

The food was made up of different undisclosed canned and packaged foodstuff to be distributed through the Accra, Tema, Kumasi and Kasoa traditional areas.

Former President Mahama also suggested to government to cross-check complaints of congestions at food distribution centres as overcrowding could defeat the social distancing protocols as spelt out by government to guide the interactions of Ghanaians.

Former President Mahama also suggested to government to temporarily remove the 50 percent talk tax imposed on costumers and reduce the prices of LPG to make it affordable to the vulnerable under the current situation.

He gave the assurance that as the leader of the biggest opposition party in the country, they would play their role effectively to ensure that all Ghanaians were comfortable under the COVID-19 Lockdown.