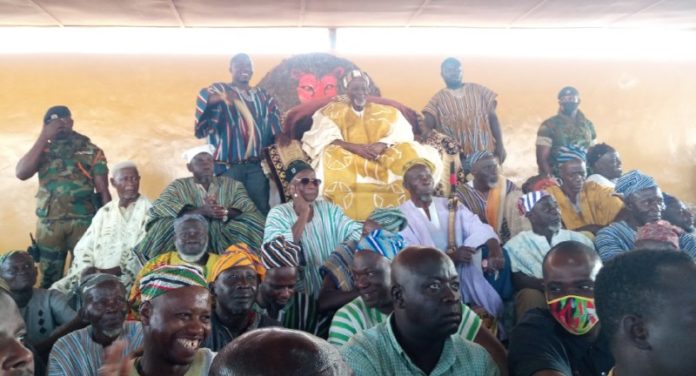 He paid the visit to seek the blessings of the Yaa Naa ahead of the December 7 polls at his palace in Yendi.

Mr Mahama was accompanied by Mr Haruna Iddrisu, Minority Leader in Parliament; Mr Huudu Yahaya, a Member of the NDC Council of Elders; Chief Sofo Azorka, a National Vice Chairman of the NDC; and some members of Parliament and former Ministers of State from the Northern Region.

Mr Mahama thanked the Yaa Naa for the friendship and cooperation he had had with him dating back to the time that he was in Savelugu as the Yoo Naa.

The NDC Presidential Candidate said he was happy there was peace and unity in Dagbon.

He said the NDC stood for development, adding that when the party was in power many Community-Based Health Planning and Services (CHPS) compounds were constructed. Several rural communities were connected to the national grid.

He said more CHPS compounds would be constructed and that more rural communities would be connected to the national grid.

He told the Yaa Naa that his next government would continue the construction of the Eastern Corridor Road.

He noted that the road which linked Yendi through Hohoe to Tema, would facilitate the fast movement of goods and people.