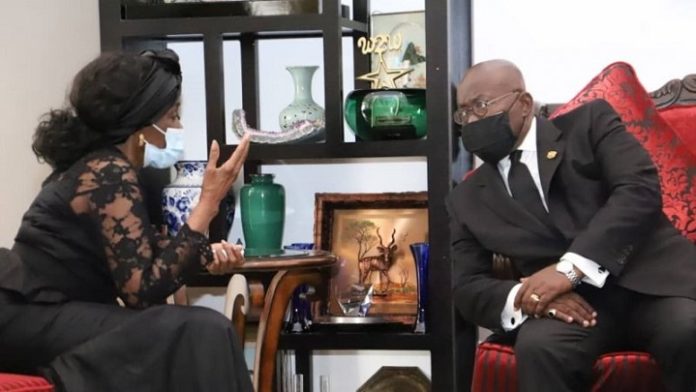 President Nana Addo Dankwa Akufo-Addo has said former President Rawlings will be given the most dignified and befitting burial to match his status as the founder of the Fourth Republican Constitution.

“He is not an ordinary Ghanaian. He was the first President of our Fourth Republic — a man who held the supreme office in Ghana — and therefore his passage has to be a matter for the Ghanaian nation,” the President said.

President Akufo-Addo said this at the Jubilee House when a delegation from the former first family called on him to officially inform him of Flt. Lt. Rawlings’ demise.

President Akufo-Addo said he was extremely disturbed and saddened by the passing of the former President.

“This is a man of great vitality, dynamism and energy. It is very difficult to conceive of him as a dead body lying in the morgue,” he said, and expressed his deepest condolences to the bereaved family, his widow , Nana Konadu Agyeman Rawlings, and children.

He assured the family of government’s commitment to working together with them for a successful and dignified exit.

“His contribution to this country’s history is there for all to see. And at the end, if he has to leave, any grateful nation should show its appreciation of him,” the President said.

He said even though he and the late president had a tempestuous relationship for many years, eventually, they both saw value in each other.

The President said it was not going to be an easy time for the bereaved family but had the trust that they would find the strength to endure such a challenging period.

Mr John Blagodzi, Spokesperson for Rawlings’ family, said: “Three weeks after the burial of his mother, former President Rawlings fell sick and was hospitalised and little did we know that he would leave us.”

He expressed the family’s appreciation to the President for his commitment to supporting them through these difficult times.

Mr Rawlings, who ruled Ghana for a total of 19 years, with 11 of that as the head of the Provisional National Defence Council, from 1981 to 1993, passed on after a short illness at the Korle-Bu Teaching Hospital, in Accra, where he was on admission. He was 73.

He served as the first president of the Fourth Republic from January 1993 to January 2001.