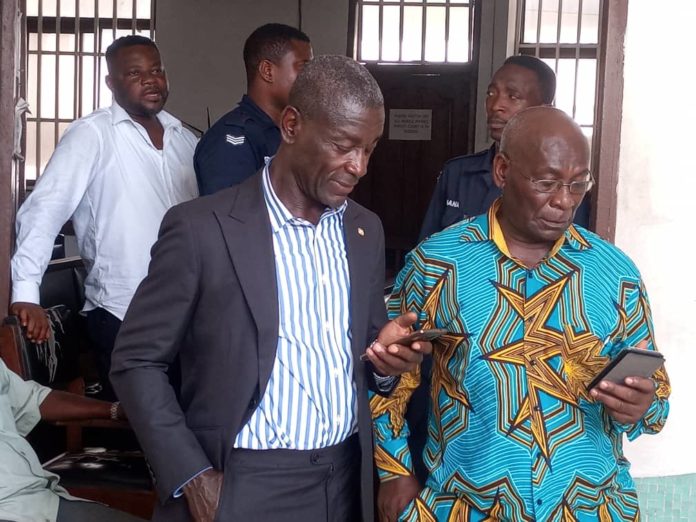 Prince Kofi Amoabeng, former Chief Executive Officer of UT Bank has made his maiden appearance before an Accra Circuit Court on Tuesday on the charges of stealing and money laundering.

The court presided over by Mr. Justice Emmanuel M. Essandoh has admitted him to bail in the sum of GHC110 million with two sureties.

The sureties, according to the court, should be public servants earning not less than GHC2,000.00.

It further ordered the former UT bank boss to deposit his travelling documents to the court registry and he is to report to the Police every Monday and Friday.

Amoabeng is to reappear on January 22.

Mr. Addo Atuah, Defense Counsel for Amoabeng prayed the court to admit his client to bail since the facts and charges were in variance to the true matters at hand.

Defence counsel said several bodies including Economic and Organized Crime (EOCO) have investigated the matter for the past two years.

According to Mr. Atuah, the transaction being talked about were legitimate transactions that occurred.

Counsel drew the attention of the court to Section 96 clause one of Act 30, saying his client was admitted to bail by the Special Investigation Team, (SIT)

He opined that during those investigations, his client was allowed to travel to and from Ghana.

Counsel held that his client had a fixed place of abode and he was in gainful employment in the country hence he should be granted bail.

He said “The accused person is a businessman with a magnitude of businesses and he would not abscond. I don’t think anyone in his right senses would abscond and leave behind his businesses”.

Prosecuting, Assistant Superintendent of Police (ASP) Emmanuel Nyamekye said the Police did not oppose to bail but entreated the court to be minded of taking his travelling document and depositing same with the court’s registry.

ASP Nyamekye further prayed the court to order the accused person to be reporting twice a week to the police.

The case of the prosecution was that the Special Investigation Team (SIT) received a report from the Price Water Coopers through the Bank of Ghana into suspicious transactions relating to UT bank.

According to prosecution, UT Bank engaged in some off-balance sheet transactions log issuing investment certificates to investors in the name of the bank.

Prosecution said it was disclosed that UT bank issued investment certificate in the name of the Bank although the amounts were never credited to the customer’s account but transferred to UT Holdings.

According to prosecution, it was further revealed that the customers’ monies were with the UT Holdings. Most of the investment with UT Bank were absorbed by Ghana Commercial Bank as part of the takeover of UT Bank in 2017.

Prosecution said the rates of interest issued to each investor varied and was subject to negotiation.