Dr Kpessa White, immediate past Executive Director of the National Service Scheme (NSS) on Friday appeared before the Economic and Financial Court for continuation of his being cross examined in the NSS trial. 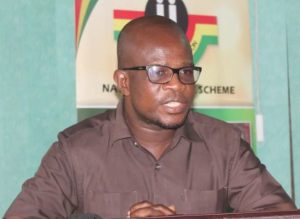 The trial is about an alleged fraud against some employees of the scheme.

The trial for the past two months was stalled following the non-availability of Dr White, who was said to be outside the jurisdiction

At the last sitting Mr Dennis Adjei Dwomoh, the counsel for Alhaji Alhassan Mohammed Imoro, a former NSS Executive Director, lamented over the various adjournments at the convenience of Dr White.

Answering questions under cross examination administered by Mr Lawrence Asante Ahenkorah, Dr White said on June 8, last year, the NSS managed to reduce the number of service personnel from 75,000 to 40,000.

When asked to furnish the court a copy on the reduction of the service personnel, Dr White said he was no longer at post but the court could obtain same at the Accounts Department of the NSS.

Dr White intimated that he could not readily know if there was an increase or decrease in respect registered and posted service personnel in the year 2013 and 2014.

When it was pointed to Dr White that the number of service personnel had increased and same was increasing over the years, he denied.

The witness said he was however aware that before every service year began NSS was given an approval for its budget.

According to Dr White the NSS should have its budget for the year 2014 and 2015.

Witness said he was not aware of any monthly returns which were given to the Controller and Accountant General Department, Ministries of Finance, and Education.

Dr White admitted that the Audit Service conducted an audit of the scheme in the year 2014 and 2015.

Alhaji Imoro Alhassan, ex-Executive Director of NSS is standing trial with 34 other persons implicated in an alleged massive fraud that had hit the scheme.

Alhaji Imoro is facing an additional charge of “giving bribe to influence a public officer.”

Alhaji Imoro, and 34 others have been put before the Court for conspiracy to commit crime, giving bribe to influence a public officer, and stealing.

They have all pleaded not guilty to the charge of stealing more than GH¢107.8 million belonging to the State through the payment of ghost or non-existing service personnel.

They have been granted bail in various sums, ranging from GH¢30,000 to GH¢5 million by the court.