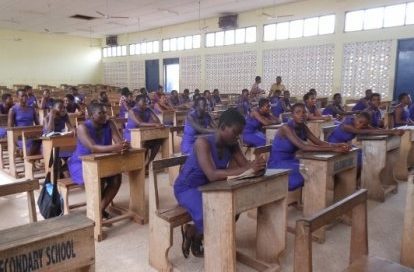 Also, while 15 student nursing mothers took part in the examination, out of the total of 1838 girls registered, 75 did not appear to write any of the papers.

This was revealed at a stakeholders’ discussion, in Sirigu, on finding solutions to addressing sexual and reproductive health challenges of adolescents, organized by the Departments of Gender and Children under the Ministry of Gender, Children and Social Protection with funding support from the United Nations Population Fund (UNFPA) and the Global Affairs of Canada.

Madam Agnes Wadadaane, the Kassena-Nankana West District Girls Education Officer of the Ghana Education Service (GES) who gave the statistics said during the WASSCE, out of the 125 girls registered at the Paga Senior High School, three were pregnant, one was a nursing mother, while one did not write.

The District Girl Education Officer expressed worry about the situation and noted that the girls who did not appear to write the examination could equally be pregnant, nursing babies or married.

She therefore appealed to the stakeholders to device ways to deal with the canker and promote education of girls in the area.

Pognaba, Francisca Akanpoe, the Queenmother of Tangasia Community noted that before the intervention of the UNFPA adolescent reproductive programme, the situation was worse and parents did not also pay much attention to the progress of their children.

The Queenmother noted that the girls on each school day would lie to their parents about going to school, but went to other places, especially on Fridays and market days.

Mrs Abiba Karim, the Headmistress of Chania Primary School, noted that as a result of the UNFPA programme, she was able to organize a durbar, where the Department of Social Welfare and Community Development sensitized the school children and parents with pictorial and visual presentations on the negative effects of engaging in bad practices, especially those acts that contributed to a change in attitude towards education.

Mrs Georgina Abetese-Ako, the Regional Director of the Department of Children, said although the three-year project had made some significant gains, the current situation showed there was the need to intensify efforts at tackling issues affecting children especially girls who were most vulnerable.

Mrs Aberese-Ako said the project was being implemented in six districts in the region and urged parents to live up to their responsibilities and be concerned about the welfare of their children.