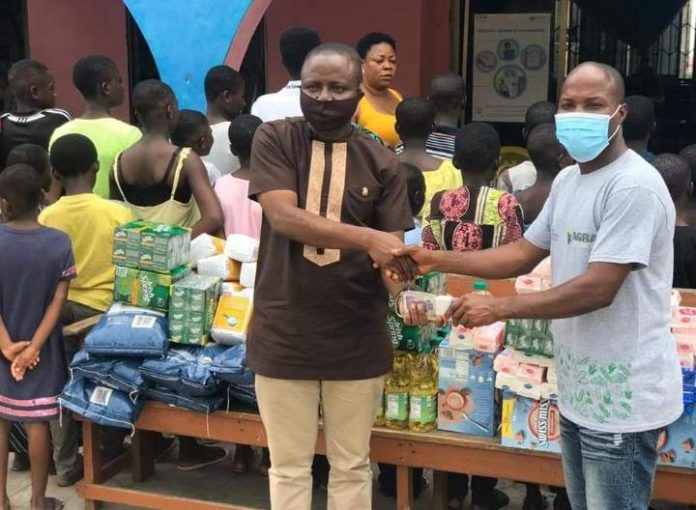 Crime Check Foundation (CCF), a Non-Governmental Orgaization has presented assorted items, personal hygiene supplies and toiletries and cash of GH¢1,500 to the Motherly Love Foundation, an orphanage at Kwabenya in Accra.

The presentation was made possible with support from two of the Foundation’s US-based Group donors; Columbus Ghanaian SDA Church and Friends of Jesus Club of the Church of Pentecost Central Assembly.

The items include; 10 packs of Irish Spring Soap, 40 pieces of Zote Soap, 6 packs of Colgate toothpaste, 15 packs of Sugar, 24 tins of Milk, 15 tins of Salt, 15 bottles of cooking oil, 20 tins of Tuna Flakes and five boxes of Chocolate Milk.

Mr Ibrahim Oppong Kwarteng, the Executive Director, CCF told the Ghana News Agency that the support was to demystify stigma, said to be the major cause of deaths among people living with HIV in the country.

He said the donation was to help the “little orphans,” mostly abandoned by people living with HIV, to help boost their immune system as they took anti-retroviral drugs.

Mr Kwarteng acknowledged efforts of the Director of the Orphanage, Reverend John Azuma, who has been living with the disease for over two decades and his wife, Mrs. Lydia Azuma for their support for orphaned children living with HIV and AIDS.

“I am happy for the work you are doing and I will want to thank you and your wife. This is what is stipulated in the Bible, Quran and other religious books to be generous to widows and orphans,” he said.

Mr Kwarteng, who is also the Ambassador Extraordinaire of Ghana’s Prisons, pledged the Foundation’s continuous support to the welfare of orphaned children.

“With the support from our donors, we intend to bring to you a lot more items,” he said.
Mr Kwarteng said the Foundation would organize series of activities to solicit support for people living with HIV and AIDS who were stigmatised and deserted.

Reverend John Azuma, who received the items on behalf the Foundation expressed gratitude to Management of CCF and its donors for the support and called on the public to encourage children living with the virus to take their anti-retroviral drugs and desist from stigmatising them.

Rev. Azuma, “… let us stop the stigmatization because a friend with the virus is still a friend.’