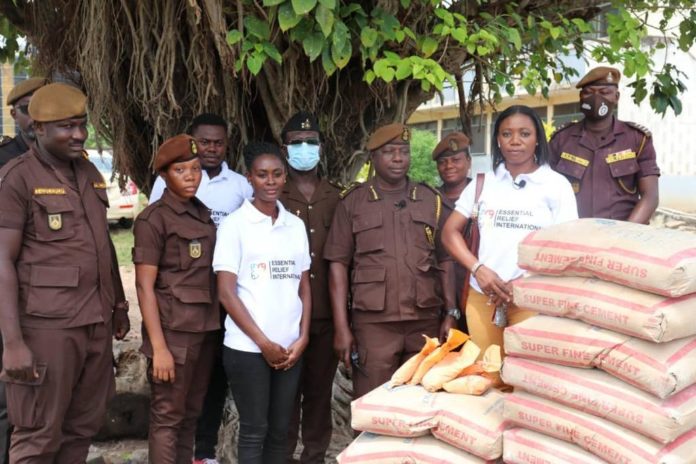 Essential Relief International Foundation (ERIF), an NGO, has presented building materials worth GHC 3,000.00 to the Ho Central Prisons in the Volta region.

The materials include sand, bags of cement and waterproof cement. Madam Evelyn Eduful, the Executive Director of the Foundation, said the donation was towards the renovation of inmates’ bathrooms which were in a deplorable state.

She said the donation was as a result of an appeal made for support by the Chaplain of the Prison. She said the Foundation’s activities were being funded by benevolent individuals and institutions.

“As the saying goes, the Prison is everybody’s potential second home, we at ERIF believe that people, who are incarcerated, deserve to live in dignity whilst they serve their sentence,” she added.

Assistant Superintendent of Prisons (ASP) Martin Darku, the Second in Command at the Ho Central Prisons, expressed gratitude for the support.

He said the current state of the bathroom, which was originally built to be used by about 200 inmates, could at times be used by over 500 inmates due to overcrowding.

“The present state of the bathhouse did not only pose the physical risk of injury to the inmates but also health risks due to its’ degraded nature,” he said.