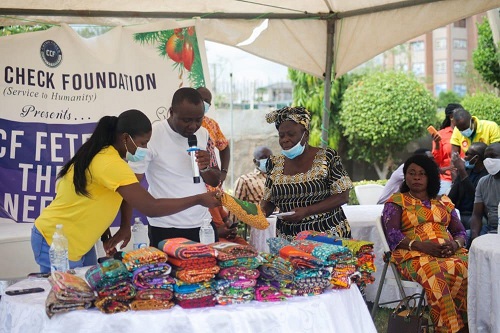 He said the all already existing programmes be it their Health Check Series, Street Charity Series, Petty Offenders Project and their Educational Support Series continue to support the vulnerable and the poor in society.

Mr Kwarteng was speaking at a get-together Christmas party organized by the Foundation and its partners in Accra, where over hundreds of orphans, widows and vulnerable people from Central and Greater Accra regions were feted.

The event was to put smiles on the faces of widows, ex-convicts, vulnerable and less privileged in society, who have benefitted from benevolent activities of the Foundation throughout the year with kind courtesy of their donors.

Some of the vulnerable people came from Ningo Prampram, Pantang and Mangoase.

The Executive Director commended its numerous donors and partners for the continuous support Foundation in helping the vulnerable in society.

He said the reasons for the get together was to make them happy and it was important they bring all of them together.

He said during the COVID-19 outbreak the Foundation did a lot, where they visited many places to support many people and educate them on the pandemic.

“We visited many poor communities to help and due to the pandemic a lot of people have lost their livelihoods, so we decided to support with money,” he said.

Mr Kwarteng said “we have paid court fines and release 700 prisoners over the years and supported them to reintegrate into society.

He said in the coming years the Foundation would bring on board more schemes to compliment what they already have to reduce poverty.

He said those in the poverty brackets were huge and the government could not do it alone, “so the way forward is to continue what we are doing so that wealth can be evenly be distributed.”

“So we will continue to support the government in this regard because no government can sufficiently reduce poverty,” he added.

He said the Foundation would introduce a new programme titled the “Return of Ex-convicts.”

Mr Kwarteng said in this, they would let the ex-convicts, who have successfully reintegrated into the community come back to the prisons to share their experiences with the inmates for them to learn.

He said another programme would be titled “Run Away from Trouble”, where the Foundation would interview inmates, who have committed crimes against societies to talk about their mistakes and the effects of their conviction had made on their families.

“We will follow up to visit their families, wife and children, and then support them,” he added.

Madam Adelaide Allassani-Davis, a Board Member of the Foundation, called on individuals and benevolent organisations to continue to support the Foundation.

He called on the beneficiaries to cultivate the habit to saving to development the lives.

Similar get together for the Northern Sector of the country took place two weeks ago in Kumasi.