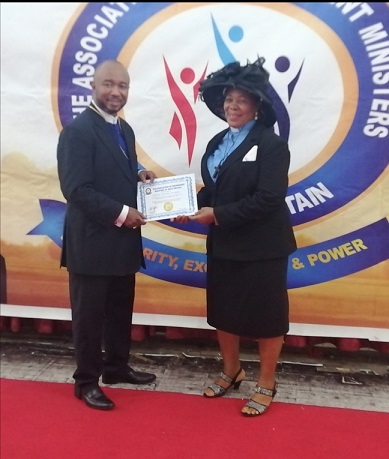 The Founder and Leader of the Voice of Refuge International Ministry (VORIM), a Ghanaian faith-based non-denominational church, Lady Rev. Akushika Quarshie has been elevated into the office of an ordained minister of the Gospel of Jesus Christ.

Her priesthood blessing was bestowed upon her by the President of the Association of Independent Ministers of Great Britain, Dr Philip Aryee at an ordination and apostolic consecration ceremony held on Saturday, July 31, 2020, at the Osu Presbyterian Hall in Accra.

The colourful ordination ceremony brought together scores of ministers of God, apostles, deacons, prophets and prophetesses from various non-denominational churches across the country who converged at the venue to offer their support and blessings to the newly ordained men and women of God.

Fifteen (15) preachers and faith workers (both men and women) were equally ordained as ministers of God to win souls for his kingdom at a similar event.

President of the Association of Independent Ministers of Great Britain, Dr Philip Aryee performing the religious ordinance charges the newly-ordained pastors to endeavour to live a life of integrity, transparency and honesty so as to be able to survive in ministry.

“We have a lot of pastors who don’t have integrity. They just live their lives anyhow and that’s why they don’t survive but if these sets of pastors are going to survive, they need integrity in their lives and in their ministry”.

The newly inducted pastors prior to their ordination have successfully completed a 2-month intensive Bible course at the Successful Ministers Academy, where they were trained on various topics including the Pastoral Ethics, Theology and Types of Doctrines among others.

The Successful Ministers Academy is a Bible School run by the Association of Independent Ministers of Great Britain in Ghana where ministers of the Gospel of Jesus Christ are trained and ordained to serve, propagate the message and win souls for the kingdom of God

Until her elevation as a Minister of God by the Association of Independent Ministers of Great Britain, Rev. Akushika Quarshie has already been engaged in soul winning/ministry work; preaching the word, praying and conducting healing and deliverance services in market places and hospitals to bring hope and life to the afflicted in the society.

Apart from her devoted service to the Lord, she has equally been involved in helping translate the word of God from the English Language to various Ghanaian dialects for easy grasp of the people.

According to Rev. Akushika Quarshie, her zeal to establish the Voice of Refuge International Ministry as authority in God’s service in 2001 was inspired upon securing her 1st missionary pastoral license and certificate from the Evangel Association of Churches and Ministries in Michigan (USA).

Speaking on the sidelines of the consecration ceremony in an interview, she said: “Now I have been empowered to keep doing what I know how to do best because I’m in partnership with Jesus Christ”.

“Jesus is going to use me as a solution carrier and then the father’s anointing and impartation too is upon me”, the anointed woman of God declared.

When asked what she intends to achieve after her successful ordination, Rev. Quarshie said: “My ministry is a calling from God to pray for those who are having challenges, those who are depressed, those who are oppressed by the devil so that God himself would step in and give them deliverance. That’s what I have been doing; deliverance, ministering and healing and would continue to do.”, she posited.

The Association of Independent Ministers of Great Britain (AIMGB) is a ministerial association with the mandate, assignment of mentoring, ordaining, providing wisdom, leadership, gazetting ministers of the Gospel so that they can do the work of God confidently.

It also provides them with the legal background and the recognition that they need in order to carry out the assignment that God has given them.

AIMGB currently has over 1,000 pastors as members.

Watch a short video on the ordination: