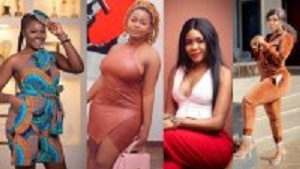 The four contestants; Success, Cilla Royal, Bella and Ruby would be looking to showcase their talent in the acting field and become stars in the near future.

Speaking in an interview, founder of the reality show Rabby Bray who is a popular actress said, the four ladies have been selected to next round due to abilities as budding actresses and a step further in their journey to stardom after getting a major boost from ‘DateRush show.’.

Success, who is known for her thrilling display on DateRush (Season 4&5), at the sidelines of the auditions which ended a few days ago said she had always dreamt of becoming a top actress, hence specifically choosing the Rabby’s Starlet TV reality show.

“The ‘DateRush’ platform is far different from Rabby’s Starlet in the sense that ‘DateRush’ is basically for entertainment and is not really a platform for me to showcase what I really have in myself; when it comes to acting.

“But, at Rabby’s Starlet, I would be given the opportunity to show how good of an actress I am and why I deserve a chance to be in the industry. I strongly believe that this is the platform for me,” she said.

Auditions for Season 2 of ‘Rabby’s Starlet’ reality DateRush TV Show ended some days ago with 35 ladies shortlisted for the first stage with the final eight contestants to progress to next round after successfully completing various tasks and will include voting by the public.

The last eight would be camped at a luxurious venue over a period of time where they will receive grooming and undertake further tasks as part of the competition to choose the ultimate winner who will be crowned Rabby’s Starlet season two.