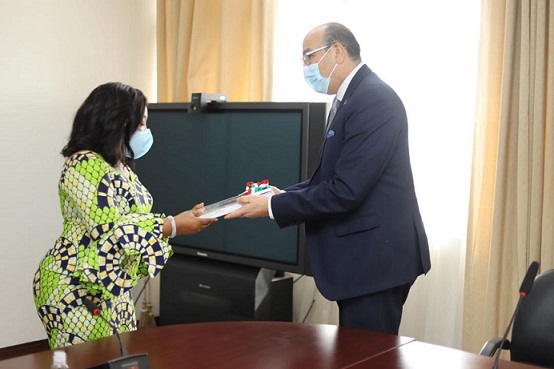 Four new envoys accredited to Ghana, have officially presented their open letters to Madam Shirley Ayorkor Botchwey, the President’s Representative at the Ministry of Foreign Affairs and Regional Integration in Accra.

The envoys took turn to present their open letters to Madam Ayorkor Botchwey, who formally welcomed them and wished them a successful duty tour of the country.

During a meeting with the Namibian High Commissioner-Designate to Ghana, the Minister-Designate, recalled the long-standing historical relations between Ghana and Namibia, dating back to the days of Ghana’s first President, Dr Kwame Nkrumah, who supported the liberation struggle, which was spearheaded by the South West Africa People’s Organisation (SWAPO), as a cardinal part of Ghana’s African decolonization policy and added that Nkrumah’s vital support laid the foundation as well as contributed to the establishment of the current political good-will between the two countries.

She encouraged the High Commissioner-designate to continue with efforts to further improve bilateral relations between the two countries by working towards the convening of the next session of the Ghana-Namibia Permanent Joint Commission for Cooperation whose preparatory meetings started in 2019 but stalled in 2020 due to the Covid-19 pandemic.

Madam Ayorkor Botchwey assured the Namibian High Commissioner-designate of the Government of Ghana’s commitment to promote cooperation between Ghana and Namibia in sectors, which were of mutual benefit and interest to expand bilateral ties.

The Minister-Designate, in her interaction with the Chinese Ambassador-Designate, noted with satisfaction, that High-level visits and exchanges between Ghana and China had become frequent and fruitful in recent years.

Madam Ayorkor Botchwey, assured Mr Lu of Ghana’s continued solidarity and mutual support in the global fight against the COVID-19 pandemic that had severely impacted the global economy and expressed appreciation to the Government of China for the invaluable support and timely supply of medical items, including PCR Machines and Personal Protective Equipment to assist Ghana’s fight against the pandemic.

Madam Ayorkor Botchwey acknowledged the long-standing bonds of friendship and cooperation, which “happily” exist between Ghana and Austria, founded on mutual commitment to peaceful co-existence, respect for the rule of law, democratic governance and international cooperation.

She reaffirmed Ghana’s determination and her personal desire to continue to forge strong partnerships for cooperation between Ghana and Austria, for, which reason Ghana, recently opened its first ever diplomatic Mission in Vienna as an indication of the commitment of the Ghanaian Government to expand its relations with Austria.

Madam Ayorkor Botchwey recalled the visit of President Nana Addo Dankwa Akufo-Addo to Austria in May 2019, during, which he held fruitful bilateral discussions with President Alexander Van der Bellen, to further deepen relations between the two countries.

She also mentioned the official visit of Mr Andreas Melán, the Austrian Special Envoy for Relations with Africa, in June 2019, during, which mutually beneficial conversations with her (Madam Ayorkor Botchwey) were held, and welcomed Mr Thomas Schlesinger, Ambassador-Designate of Austria to Ghana.

Madam Ayorkor Botchwey expressed appreciation for the financial and technical assistance extended by the Austrian Government to Ghana in various fields, including those related to infrastructure, health, agriculture and the education sector, where various training programmes and scholarships had been offered to Ghanaians to study in Austria, which had contributed to the development of the Ghanaian human resource and expertise.

Madam Ayorkor Botchwey, in her engagement with Mr Enrique Ernesto Escorza Zamudio, Ambassador-designate of Mexico to Ghana, spoke about the longstanding historical relations between the two countries, dating back to August 1961, when Mexico became the first Latin American country to establish diplomatic relations with Ghana.

She indicated that Mexico – Ghana relations had always remained cordial based on solidarity and mutual respect and stress Ghana’s readiness to continue working closely with Mexico within the framework of multilateral organizations to protect and advance the interest of developing nations in an increasingly challenging global environment.