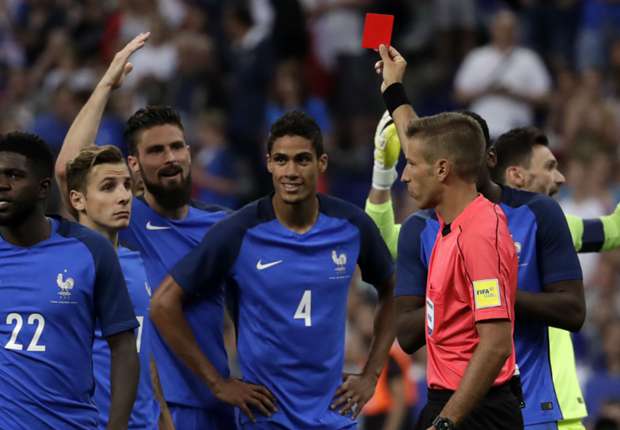 England signed off for the summer with a disappointing 3-2 defeat to France in a friendly on Tuesday despite the hosts playing the last 45 minutes with 10 men.

France had Raphael Varane sent off three minutes into the second half but Didier Deschamps’ side were the better team with 10 and deservedly won it though Ousmane Dembele 12 minutes from time.

“Scoring twice in France should be enough. We have got to find a way to win that, we just weren’t good enough. They were getting too much space in vital areas, even with 10 men. We want to be brave and play from the back and mistakes will happen. It’s disappointing. We were in the driver’s seat but we didn’t step it up another gear. Not good enough,” said Harry Kane, who scored both England’s goals.

England don’t have another game until September and they looked short of ideas in the second half, despite having the extra man for the last 45 minutes.

France, by contrast, looked fresh and in Kylian Mbappe, Dembele and N’Golo Kante they had the three best players on the pitch.

England rested Joe Hart and gave Tom Heaton and Jack Butland 45 minutes each in goal, in a game that used video refereeing – the first time England have used it.

Things looked good for England when Kane scored from about six yards out after just nine minutes after a slick move involving Eric Dier, Raheem Sterling and Ryan Bertrand.

Olivier Giroud had a brilliant strike ruled out for offside but France levelled on 22 minutes when Heaton could only push a Giroud header out to Samuel Umitti, who scored his first goal for France.

The hosts then took the lead just before half-time when Dembele left John Stones with a beautiful piece of skill and though his shot was saved by Heaton, the rebound was turned in by Djibril Sidibe, who also scored his first international goal.

As they had done in the first half, England looked bright at the start of the second half and when Dele Alli was clipped by Varane, the referee awarded the penalty and handed the Frenchman a red card.

Kane made no mistake from the spot but from that moment on, England were distinctly second-best as France made light of the one-man disadvantage.

Mbappe ran the England defence ragged with his blistering pace as he played up front on his own and only the crossbar denied him what would have been a stunning strike.

But it was only a brief respite for England as Dembele scored the winner 12 minutes from time with a low shot into the bottom corner after mistakes by the England defence.

England’s next match is on September 1, a World Cup qualifier away to Malta.