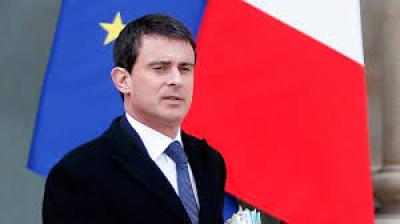 French Prime Minister Manuel Valls called for a re-balancing of trade flows and global climate action during a two-day visit to China that began on Thursday. Valls underscored French enthusiasm for Chinese investments, including recently announced initiatives at the Toulouse airport, and said that his country was open for cooperation.

“France is more open than ever to China: its investors, its students and its tourists,” Valls said in an interview with Xinhua news agency prior to the visit. But he also called for reciprocity when it comes to trade, saying that Chinese markets should also be open to imports from Europe.

Valls said cooperation on climate change mitigation was a central issue on his trip, pointing to the need for a binding commitment to limit greenhouse gas emissions to be signed at the next UN climate summit in Paris in December.

“Climate change is the biggest challenge facing our society. An ambitious agreement that preserves the future of the planet should be signed at the end of the conference to limit global warming,” Valls said.

After visiting an Airbus final assembly line for aircraft in the eastern city of Tianjin, Valls met with his Chinese counterpart, Li Keqiang. The two ministers oversaw the signing of a slew of cooperation agreements – including one between French electricity company EDF and Chinese nuclear operator CGN.

On Friday, Valls is slated to travel to Shanghai and visit a research centre for tyre manufacturer Michelin.