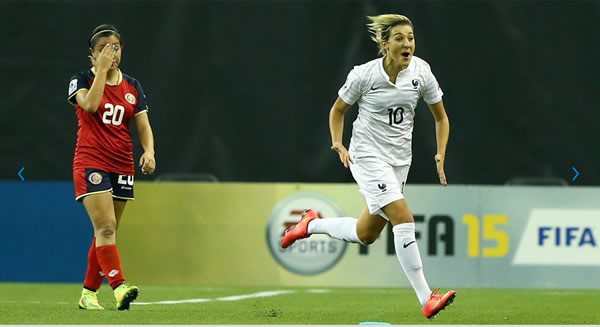 France have reaffirmed their title credentials at the FIFA U-20 Women’s World Cup Canada 2014 with a dominant 5-1 victory over Costa Rica at Montreal’s Olympic Stadium.

Gilles Eyquem’s side were in rampant form against a?Ticas?side that simply could not cope with their opponents’ evident technical and physical superiority.

As U-17 world champions in 2012 and European U-19 queens last year, the French are considered among the favourites for the trophy and, from the offset, they set about proving why. It took just seven minutes for them to take the lead, with Faustine Robert earning a penalty after she was taken out by keeper Noelia Bermudez in the act of hitting a post with a lob from the corner of the area.

Claire Lavogez took full and emphatic advantage of the opportunity with a textbook penalty, sending the keeper the wrong way with a rocket-like shot into the roof of the net.

Lavogez’s second was of a different type and a thing of real beauty, with the player waiting for the ball to drop, sizing up her angles and using the instep of her right foot to loop an exquisite volley?in?off the underside of the crossbar.

Both were goals worthy of gracing any World Cup, and they left France top of Group D – and Lavogez at the summit of the tournament’s scoring chart.

Robert had been hugely influential in breaking the deadlock and 11 minutes later she doubled France’s lead. On this occasion, the goal owed most to Kadidatou Diani, who dribbled past three defenders on the right before poking over a cross from the byline, leaving her team-mate with the simplest of side-foot finishes from six yards.

Already,?Las Ticas?were beginning to fear a rout, and those concerns intensified midway through the half when Fabiola Villalobos sliced into her own net in an attempt to clear a Lavogez corner.

The France No10 then rounded off the first half scoring with her second of the night – and what a strike it was. In what will surely be a contender for goal of the tournament, Lavogez, took on the volley a dropping ball at the corner of the box and sent a first-time shot looping into the far corner?off the underside of the crossbar.

?Costa Rica must have been fearing double figures at this stage, but France struggled to maintain their electrifying standards in the second half and just one more goal followed. Not for the first time, the assist was almost as impressive as the strike itself, with Sandie Toletti releasing Ouleymata Sarr to score at the second attempt after Bermudez had blocked her initial effort.

The French faded as the match reached its?conclusion and, in injury time, Melissa Herrera, easily Costa Rica’s?top performer, scored at the second attempt to claim the goal her excellent performance deserved.

France now go on to face New Zealand in their next Group D match, while Costa Rica will face Paraguay.