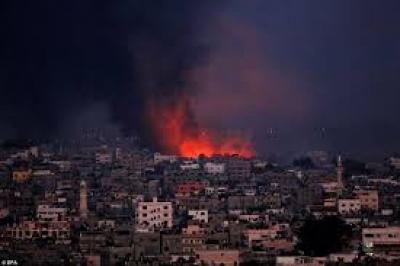 “The French president has promised me [that his country will] participate in the aerial effort against the Islamic State,” al-Abadi said at a joint press conference with Hollande in Baghdad.

“The international community has to shoulder its responsibility to stop terrorism coming to Iraq from Syria,” al-Abadi was quoted as saying by independent Iraqi site Alsumaria News.

Hollande, who also met Iraqi President Fouad Massoum, said he had discussed French military and humanitarian support for the country that is struggling to dislodge the extremists from its northern and western territory.

The French leader called the militants’ surge in Iraq and Syria a “global threat.”

“We will work with our allies for supporting Iraq in line with international law and legitimacy,” said Hollande, who will host a conference aimed at helping Iraq combat terrorism, on Monday in Paris.

US Secretary of State John Kerry, meanwhile, arrived in Ankara in an attempt to rally Turkish support for the international coalition spearheaded by Washington to fight back the al-Qaeda splinter group that controls large swathes of Iraq and neighbouring Syria.

Following a meeting in Saudi Arabia with Kerry on Thursday, foreign ministers of 10 Arab countries pledged in a joint communiqu? to “do their share” in the US-led campaign against the jihadists.

NATO member Turkey declined to sign the communiqu?, and Kerry was expected to seek a stronger commitment from Turkish leaders to turn back the gains of the radical Sunni group.

US President Barack Obama last month ordered airstrikes against the Islamic State in Iraq, saying they threatened US interests and were poised to commit genocide against a religious minority.

This week he signalled the airstrikes could be expanded to Syria, drawing condemnation from Russia and Iran. Syrian President Bashar al-Assad has said he would see any intervention in his country as an act of aggression.

This week, French Foreign Minister Laurent Fabius said his country would participate “if necessary in military air action” against the Islamic State, but would provide a different form of support in Syria.

France had famously refused to be part of the US-led war in Iraq in 2003. Eleven years later, it has pointed to the fact that the Iraqi government’s request for aid in fighting the Islamic State was justification for a new intervention.

Paris is, however, reluctant to intervene militarily in Syria in the absence of an international legal framework for action there, because of the lack of Russian support for a UN resolution.

The CIA has warned that between 20,000 and 31,500 fighters could be mustered by the Islamic State across Iraq and Syria.

Meanwhile, Berlin said it had banned all support from German soil for the Islamic State, including any displays of its flag, in a move aimed at cutting off any fundraising and reinforcements for the militant group.

The decision was based on advice from security and intelligence agencies concerned over the growing number of Australians linked to Islamist militant groups abroad and not on evidence of a specific threat in Australia, he said.

Australia, which has indicated it is willing to support the US strikes against Islamic State, estimates that 60 Australians are fighting on the side of jihadist groups in places such as Syria and Iraq, with the support of a wider network in Australia.