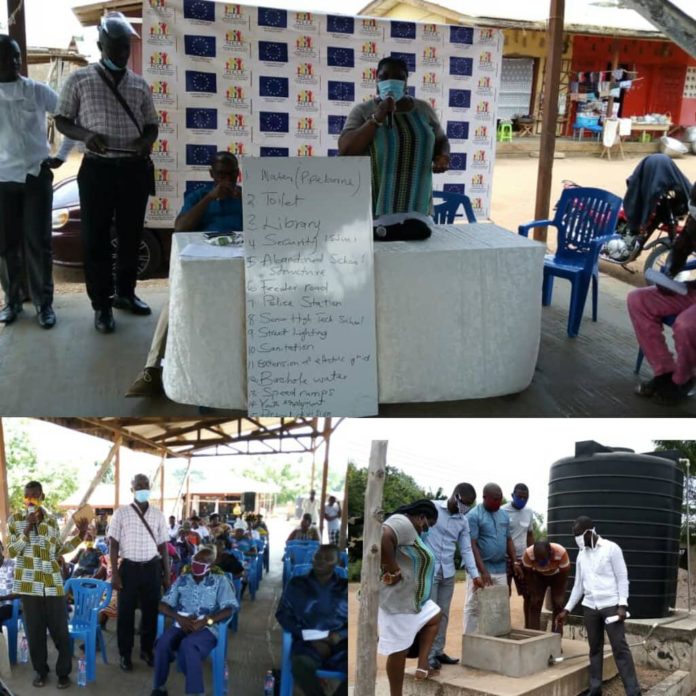 The people of Frankadua, a farming community in the Asuogyaman District of the Eastern Region are seeking support to get potable drinking water.

They said the only mechanised borehole which the Member of Parliament provided for the community had broken down a couple of years ago and had not been repaired, creating a huge water problem for the community.

The community members who made this known at a social auditing forum organised by the National Commission for Civic Education (NCCE), appealed to the government, philanthropists, corporate entities, and benevolent organisations to come to their aid.

They said though the community needed other things such as community library, upgrading of the Vocational School to a Senior High Technical School, and toilet facilities, water was the most paramount, thus the appeal for support to address it.

The people said they could not comprehend why it was impossible for them to have access to pipe born water, and had to rely on River Alabo as a source of drinking water, meanwhile their community was rightly located between Kpong and Anum Water Works.

Mr Bright Amenorhu, Assembly member for Morgadzi Electoral Area said the River, which served as their source of drinking water dry up during the dry seasons, thereby exacerbating their plight.

He disclosed that water from the River was not safe for drinking, because some years back, people suffered from guinea worm and sight problems as a result of drinking from it.

Madam Pearl Addo, NCCE Director, Asuogyaman District, inaugurated a five-member committee to take charge of the issue, and ensure that it was brought to the attention of the appropriate authorities for quick redress.

She charged the community to develop an interest in participating in activities aimed at enhancing socio-economic development, and demand accountability from their duty bearers as a concerted effort was required for societal growth.

The Director entreated the youth to cherish peace at all times and should not engage in any act of violence before, during, and after the December 7 polls, as “they are peace-loving people.”

She implored them to observe the Covid-19 preventive protocols to stem the spread of the virus as the fight against the pandemic was not yet won.

The forum was an Accountability, Rule of Law and Anti –Corruption Programme (ARAP), aimed at developing mechanisms to tackle corruption, and was sponsored by the European Union (EU)