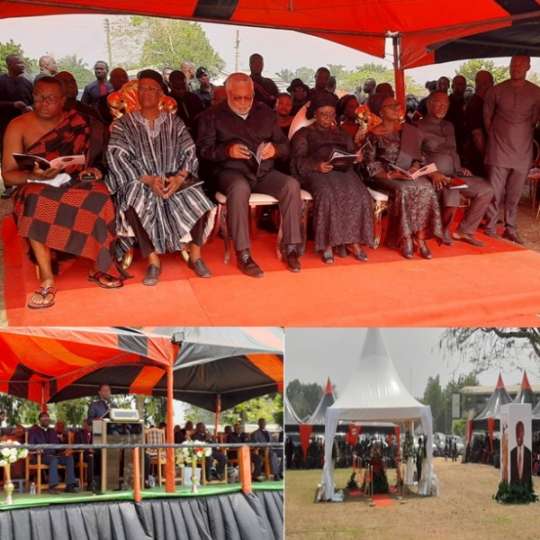 Mourners from all walks of life gathered at the St Paul’s Technical School at Kukurantumi in the Eastern Region to pay their last respects to the late Mr Fred Ohene-Kena, a former Minister for Mines and Energy.

Mr Fred Ohene-Kena who was born on March 28, 1936, was trained and worked as a mining engineer at the consolidated African Selection Trust (CAST) now known as Ghana Consolidated Diamonds at Akwatia.

He published an article in the late 1970s suggesting policies for the effective management of Ghana’s mining sector and that earned him an invitation by the PNDC leadership to serve as Under-Secretary for lands and Natural Resources.

In 1988, he was appointed the Eastern Regional Secretary where he served for 4 years and contributed immensely to his home region and later became the NDC Eastern regional chairman.

The late Mr Ohene-Kena In 1994, was appointed ambassador to Czech Republic overseeing Slovak Republic, Poland and Hungary, he returned home in 1997 to serve as the Minister for Mines and Energy and later during Professor Mills’s administration he was appointed board member of AngloGold Ashanti, to represent the interest of Ghana government.

In recognition of his hard work, experience and longstanding commitment, the NDC party appointed him as a member of the Council of Elders where he contributed his quota to the growth and sustenance of the party until his demise.

Apostle Professor Opoku Onyinah, former chairman of the Church of Pentecost, preaching the sermon at the burial service, said there was life after death and cautioned everyone to be conscious of how they lived their lives.

Tributes were read from the President of the republic, Nana Akufo-Addo, who described him as a Ghanaian patriot, Osagyefo Amoatia Ofori-Panin, Okyenhene, The Ministry of Lands and Natural Resources, The Eastern Regional Coordinating Council, the NDC, the Church of Pentecost, Children, Wife and Siblings among many others.

Mr Ohene-Kena passed on to glory on October 4, 2019 at age of 83, his mortal remains has been interred at the Akyem Kukurantumi Royal cemetery.