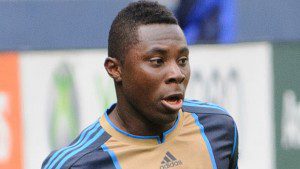 The right winger came off in the 65th minute with the visitors already ahead through a first-half own goal.

The Former American wonderkid of Ghanaian descent Freddy Adu signed for Finnish top-flight side KuPS on a one-year-contract last month.

Once touted as the next big thing, Adu is playing football professional in his eighth country after flopping almost everywhere he?s played.

He joined former Asante Kotoko defender Gideon Baah  who is also in Finland but plays for champions HJK Helsinki.

Unattached since being released by Jagodina in December, the deal with KuPS will help him to keep in his career on track.

An attacking midfielder by trade, Monaco and Benfica are just two of Adu?s previous clubs.