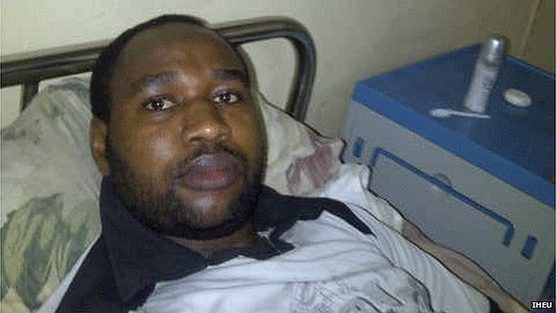 I am writing to lend my support to the Free Mubarak Bala Campaign and urge all friends out there to do so. As you may have heard, on June 16, Nigerian atheist ?Mubarak? sent an ?SOS? drawing attention to his situation at a psychiatric hospital in Kano. The mail reads:

?This is Mubarak, (@mubarakbala) the ExMuslim from the Shari?ah State of Kano, Nigeria. I can only reach you today because I have been sedated (tranquilized) with an injection administered on those who are mentally unstable. After being beaten to pulp, and choked by the neck until I passed out, (asphyxia), by my Dad and 3 of his male brothers. It was?friday?evening, just waking up to see myself in a psychiatric hospital, among mad-men. The family had long been threatening my life.? Mubarak was forcefully taken to the hospital after he openly professed atheism and renounced Islam. According to Mubarak, two doctors had examined him. The first doctor declared that atheism was not a form of mental illness. But his family was not satisfied by the diagnosis and went for a second opinion. The second doctor stated probably what the family members wanted to hear, that he had some psychological disorder. The doctor prescribed some medication.

Mubarak goes on to say in his mail.

?Now, I woke up only to realize their new doctor has prescribed drugs and injections for me as a psycho patient, on false account that I have been deluded telling people am a senator and governor and minister, so appallingly absurd! It is the same Doctor that told me last week on a ?mock? therapy, that ?everyone needs God?), eventhough another doctor who studied in Russia had 6 months ago told them Atheism is not a mental disease, and gave me a clean bill of health? they were obviously disappointed, so they opted to a more conservative one, who studied in Egypt?.

Mubarak fears for his health and life.

What I fear is; the injections and drugs have started shifting my facial orientation and affecting my speech and reasoning, my hands are now shivering on their own. It may end-up ruining my brain, my life, and if I am helpless and discharged home, they could fake something like my suicide, to rid themselves of the scum, they have been threatening such, ever since I declared openly I?m an Ex Muslim?

Indeed declaring oneself an ex muslim in a place like Kano is like passing a death sentence oneself.

The father of Mubarak who writes for a local newspaper is not taking the matter lightly. Mubarak said:

?I realized my Dad has already made a post in my name, with the phone, to my friends on facebook, posting the Shahada (testimony of faith in Islam), on the same night, which further implies it was never about my health, but family honor. I knew every post insulted(sic) his intolerance, and anti-semitic personality, as a big man of Kano?.

The father reportedly said ?whoever among his children abandons Islam is no longer a human being, but a monster?. Anyone who understand the situation in Kano when it comes to Islam and sharia law will not be surprised by this statement.

Mubarak?s telephone was siezed but he managed to borrow a phone from somebody and was able to send out this message.

A member of the Lagos State Humanists, Bamidele, who follows Mubarak on twitter saw this message and forwarded it to me. When I read it I thought,?what if this?was one those fake ?419? emails from unscrupulous persons wanting to defraud unsuspecting sympathizer?. I never heard about an atheist in Kano called Mubarak. I was told he was active on twitter. And I am not.

But the main question is: if this were to be true, how do we really help Mubarak? Kano is a risky and dangerous terrain to navigate when it comes to matters like this. The state is not just a stronghold of Islam but a hot bed of muslim fundamentalism. Kano is a sharia state and the sharia police are active. So, how do we support Mubarak without compromising his safety?

Meanwhile, Bamidele and other humanist friends in Lagos have contacted the hospital in Kano and confirmed that Mubarak was actually admitted and was undergoing treatment.

They sent a lawyer who met with Mubarak and the family members. The lawyer is exploring ways of assisting Mubarak in what is clearly a very delicate situation. A press release from Aminu Kano Teaching Hospital dated June 25 2014 and signed by the Assistant Director(Information) confirms Mubarak?s case.

It reads: ?We have a patient by name -Mubarak Bala who currently on admission in the pschiatric ward of our hospital. Mubarak has a challenging Psychiatric condition(details withheld to protect patient?s confidentiality) which require treatment under supervision. It is not true that he is held under detention for any reason. His admission was done formally with his family?s consent with full consideration of the necessity to do so. He is under treatment but fully conscious and comfortable. His nutritional needs are fully taken care of contrary to the assertion that he is heavily sedated and not being given food. One organisation has hired a lawyer for Mubarak and is in contact with hospital. He saw Mubarak and he talked to him. His continued stay at the hospital is on medical grounds and the hospital is not interested in keeping him longer than is necessary?

Though the hospital says that Mubarak is not held against his will, Mubarak says he is.

I am aware there are some people who dispute the claims by Bamidele and other campaigners. Such doubts are expected because of Nigeria?s notoriety for scams. But this campaign is not really about Bamidele or Mubarak. It is about correcting a pervasive misconception that is being used to abuse atheists and justify religious bigotry. This campaign is about showing support and solidarity to atheists, ?blashpemers? or ?apostates? who are in danger anywhere in the world.

Bamidele is well known to me. He is a committed humanist activist in Lagos. Bamidele is passionate about supporting atheists who are being persecuted. He and other friends in Lagos are doing whatever they can to show support and solidarity to Mubarak under very difficult and challenging circumstances. Let us all rally behind them.

An online petition, Free Mubarak Bala, has been set up and has attracted over 6,000 signatures and still counting. I urge you to append your signature to the petition.

Renouncing Islam is a capital offence under sharia, and that should not be the case. Muslim families take it seriously. They regard it as a violation of the family?s honour and religion. Mubarak Bala needs all the help he can get to avoid further health damage and abuse. His family needs to be told that professing atheism or leaving Islam is a human right not a form of mental illness.