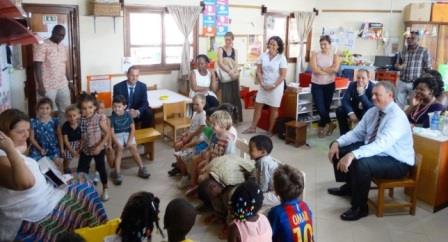 Mr François Pujolas, the French Ambassador to Ghana and Dr Jean-Luc Mure, Head of Cooperation and Cultural affairs at the Embassy, have paid a day’s visit to the Lycée Français Jacques Prévert of Accra (LFA).

A statement issued by the French Embassy in Accra and copied to the Ghana News Agency said the Ambassador was in the school on Tuesday 14th November, a day dedicated to welcoming new kindergarten pupils.

“For the Lycée Français of Accra, this initiative affords the occasion to throw the spotlight on its dynamism, the commitment of the team and the success of its students, the Ambassador said.

“The French Embassy is proud to be blessed with such a partner in education which directly facilitates integration and exchange between French and Ghanaian youth. This approach is fundamental to the relationship we wish to strengthen with Ghana,” he added.

The statement said the LFA was the only accredited institution of French education in Ghana.

It said the school was enriched with experience and the dynamism of the network of AEFE institutions to which it belongs and would be from 12th to 19th November partake in the first edition of: “The World French High Schools Week”.

The statement said the LFA was one of the French educational establishments operating under the management of the Agency for French Education Abroad (AEFE) that oversees no less than 494 institutions and schools more than 340, 000 pupils across the globe.

It said the LFA represents a medium of cooperation between France and Ghana.

The statement said there were partnerships with the Embassy’s network in Accra, the French high schools within the sub-region and other schools in Accra.

It said the institution makes it a top priority to meet the objectives set by the AEFE, namely: excellence, with an average success rate of 90 per cent in the baccalaureate examinations, a high number of academic pursuits in French and international tertiary institutions (international opportunities), value-sharing, with the cohabitation of more than 30 nationalities and the showcase of French culture through the system of teaching.

It said through close collaboration with parents, the administrative board and the school council, LFA was constantly improving its teaching and learning environment.

“As the educational arm of the French Embassy in Ghana, its objective is to as much as possible, open its doors to Ghanaian partners, as illustrated by the participation of the Ghana International School and Ecole Ronsard in this special week’s activities,” the statement said.

“Refurbishment and extension works are also set to be undertaken in the coming years. The school offers enrolments from kindergarten through to the high school level and prepares the pupils for French examinations while making provisions for transitions into other educational systems,” it added.