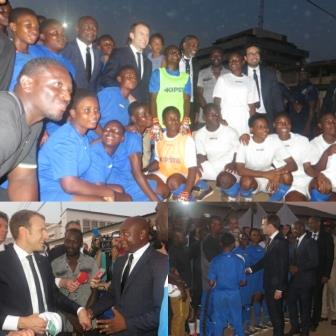 President Macron, who paid a day’s working visit to Ghana on Thursday, met and interacted with the youth of Jamestown and the boys’ and girls’ football teams of the Holy Trinity Cathedral Senior High School at the SSNIT Park at Jamestown, Accra.

He was received at the venue of the event and conducted around by Africa’s legendary former football star, Mr Abedi Ayew, known professionally as Abedi Pele.

The highly excited youth of Jamestown gave President Macron an enthusiastic rousing welcome, with others struggling to take pictures with him.

The event was organised by the French Embassy in Accra, in collaboration with Decathlon, a French Company that dealt in sports shoes, sports gear and sports equipment; Kipsta, Outshock and The Gym.

President Macron, who also watched a few boxing matches between the youth at ‘The Gym’, urged the youth to aspire to greater heights.

Abedi Pele, who played as midfielder and served as captain of the Black Stars of Ghana during his career, recounted to the President his football days with several European clubs such as Lille and Marseille.

Among President Macron’s entourage at the event was Mr Francois Pujolas, the French Ambassador to Ghana.

President Macron’s visit to Ghana, the first ever by a sitting French President, was part of activities to mark the 60th anniversary of Ghana-France relations.

President Macron, who is on a three-nation tour of Africa, had already been to Burkina Faso and the Ivory Coast.

The French leader is seeking to renew his country’s relations with Africa, as well as give a boost to the crusade against migration and Islamic militancy in the Sahel region.
GNA/Newsghana.com.gh