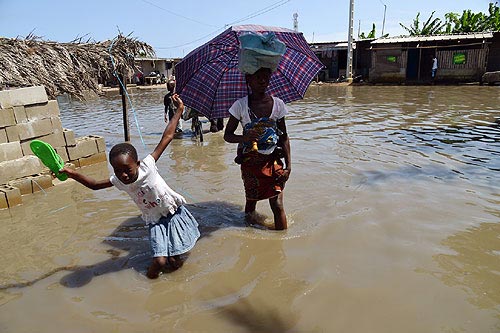 Some parts of Accra, including the Kwame Nkrumah Circle, Lapaz, Kaneshie among others were also flooded in what has almost become a normal occurrence even at the slightest downpour.

Some roads in the capital were also inundated by the downpour leaving passengers stranded.

The heavy rains come months after a flood and fire disaster which claimed the lives of close to 200 persons.

The Accra Metropolitan Assembly (AMA) days after the incident occurred, demolished some structures on waterways and dredged some choked drains since in their view, that was largely to blame for the perennial floods.

But the rains on Thursday dawn which continued on Friday morning for a few hours, has left many areas flooded.
From the Giffard Road near Burma Camp, a commercial driver, Prince Charles, told Citi News traffic moved slowly as flood waters submerged the road.

?We are on the route from 37 Trade Fair road and because of the poor drainage, the whole road is flooded and cars cannot move. The road is filled with water and although there is an underground drain that the water needs to run through so that it will not get on the road, I don?t know how it was done but the water is not going through and it is competing with the vehicles for space,? he explained.

Citi News? Raymond Acquah also reported of heavy vehicular traffic at Kaneshie because of the floods.
According to him, ?no one is using the route from Kaneshie to Accra because the place is flooded. They have all joined the circle route.”

?The traffic light is working but the cars are not moving so it is virtually useless. There are no Policemen on the ground, those Policemen who use to be at Kaneshie are no longer there. People are standing in front of shops while others have moved into vehicles which are not moving.There is little movement??