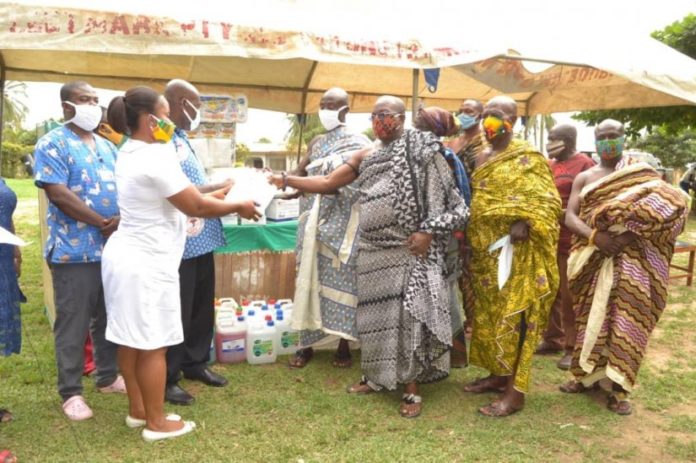 The KU Friends Club of Agona Kwanyako, a pro-development Group, has presented Personal Protective Equipment (PPE) valued at GHC10,000 to the Kwanyako Health Centre to support their fight against the COVID-19 pandemic.

Making the presentation, Mr Evans Duncan, Organizer of the Club, said the group was formed by Madam Grace Nana Adjoa Nyakoh for citizens of Kwanyako, both home and abroad, to spearhead the development of the town.

The members, who engage on social media platforms, therefore, decided to assist the Health Centre to fight the COVID-19 crisis.

Mr Duncan stated that Kwanyako Citizens were poised to support the infrastructural development for education and health, among other sectors, which had been retarded.

Nana Kojo Frempong, an Executive Member of the Group, said the government alone could not shoulder all developmental projects, hence the need for the citizens to help the facility.

Nana Frempong who is also Secretary of the Kwanyako Peace Council, said the council was able to settle chieftaincy disputes between the Kwanyako Chief and Sub-chiefs and there was absolute peace in the town.

Nana Asare Panyin IV, Krontihene of Agona Kwanyako, praised the Group members for their sense of responsibility and patriotism.

The Krontihene explained that the Kwanyako Health Centre, built in 1986 through self-help by the citizens, had never received any infrastructural development from successive governments.

He called for a major expansion of the Facility by the Agona East District Assembly and the Central Government to help provide quality healthcare.

Mr Samuel Kobina Yarquah, Deputy Chief Physician Assistant of Kwanyako Health Centre, thanked the group for the gesture and asked other citizens, both home and abroad, to emulate it.

He reiterated appeals to the Government and Agona East District Assembly to build a new block for the health centre to meet the growing population of now 29,000 people who patronised the facility.

Mr Yarquah announced that the Centre had been selected as a COVID-19 reference centre, however, the structure was in a deplorable state.

He said the poor nature of the facility had forced management to use its meagre internally generated funds to paint some of the walls.

He, therefore, appealed to the Central Government to prioritise the upgrading of the facility.