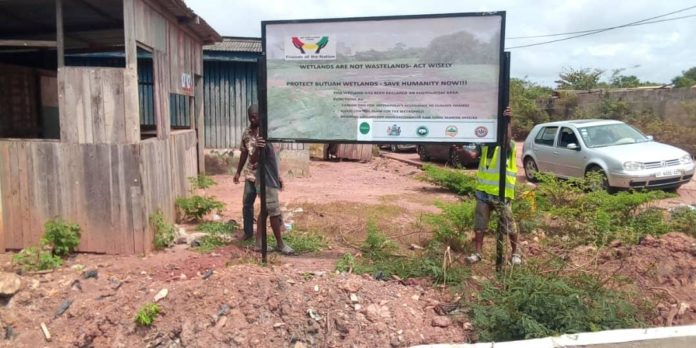 A Project Officer at Friends of the Nation (FoN), a social, environmental Non-Governmental Organization ( NGO) Mr Eric Atsiatorme has said FoN will collaborate with other agencies to conserve and preserve wetlands from becoming extinct.

He said wetlands required prudent management as the resource contributed to the socio-economic development of the country.

Mr Atsiatorme was speaking to the media when FoN led some government agencies such as the Ghana Wildlife Division, the Environmental Protection Agency (EPA), and the Sekondi-Takoradi Metropolitan Assembly (STMA) to mount a billboard at Butuah wetlands near New Takoradi in the Western Region.

The inscription on the billboard reads “Wetlands Are Not Wastelands-Act Wisely”. “Protect Butuah Wetlands, Save Humanity Now”.

Mr Atsiatorme bemoaned the fact that developers were fast encroaching on the resource, hence the need to draw the attention of regulating agencies to halt any development at Butuah wetlands.

The Project Officer said the functions and benefits derived from the wetlands such as carbon sequestration, were being de-emphasized.

Mr Atsiatorme admitted that environmental issues were very dear to the hearts of FoN and that it would continue to keep an eye on the resource.

The Planning Officer at the STMA, Mr Kofi Yeboah said activities of city developers have polluted water in the Butuah wetlands, adding that efforts were being made to restore the wetlands to its former glory.

He stressed the need to protect wetlands for the fish stock to get a breeding space.

Mr Yeboah said his outfit did not know about the encroachment at the area, adding that the STMA would factor Butuah Wetlands into its developmental agenda and that STMA has started social and environmental impact assessment of the area.

A Senior Programmes Officer at the EPA in Takoradi, Mr Hakim Seidu denied knowledge on the reclamation of the wetlands area at Butuah and was categorical that he would confirm from the STMA and “if there is no permit, the project will be stopped”.

He said the EPA was not against the developers but “development within wetlands must go through proper engagement to avoid encroachment.

The Administrative Officer at the Ghana Wildlife Division of the Forestry Commission in Takoradi, Madam Nancy Boakye Ansah said though the Butuah wetland was not listed, there was the need to protect and promote the resource.

According to her, the ecological and socio-economic benefits of wetlands to humanity were enormous, noting that wetlands served as breeding grounds for fishes.

“Wetlands also serve as habitats for small pelagics as well as a resource for education and research purposes”.

She reminded society not to overlook and consider wetlands as wastelands, adding that the Wildlife Division would continue to support inland and coastal wetlands conservation.

Earlier, the Executive Director of FoN, Mr.Donkris Mevuta, told journalists that the mounting of the billboard would result in environmental resilience for the Sekondi-Takoradi Metropolis.