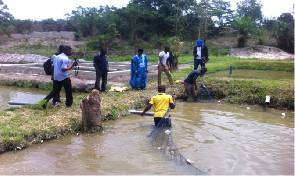 The programme is in limbo because of lack of or delayed, financing. This will increase the market share of commercially farmed fish from 3% in 2010 to 30% in 2016.

These were contained in a research conducted by Centre of Scientific and Industrial Research (CSIR), scientists Dr Seth Agyakwa, E. Rurangwa, H. Boon and B.C. Bolman on the development of aquaculture in Ghana: Analysis of the fish value chain and potential business cases.

Dr Agyakwa told The Finder that with support from the Department for International Development (DFID), New Partnership for Africa?s Development (NEPAD) and the World Bank, the government developed the Ghana National Fisheries and Aquaculture Sector Development Plan (GNADP 2011-2016).

However, he said funding to implement the GNADP delayed while formation and administration of structures to ensure the release of funds in Ghana to targeted projects also delayed.

For example, zoning of the Volta Lake for aquaculture production for sustainability of the environment and species diversity conservation has not been completed.

Dr Agyakwa also said there was the need to develop aquaculture standards, which is a step ahead of aquaculture guidelines.

The 73% of the total production came from marine fisheries, 20% from inland fisheries and 7% from aquaculture.

With the exception of the tuna stocks that remained reportedly unaffected, marine capture fisheries production has followed a downward trend since the mid-90s.

FAO data are usually available two years behind those of the country, and inconsistencies have been noticed between these two sources.

The marine sector is the most important source of local fish production, delivering more than 70% of the total supply.

Inland Fisheries is taking place mainly in Lake Volta, which hosts about 143 fish species and provides about 90% of the total inland fish catch. Lake Bosomtwi is a major source of tilapia around the Kumasi area.

Other reservoirs behind major dams such as Weija, Barekese, Tano, Vea and Kpong, dams, dugouts, rivers and lagoons contribute to the rest of inland fishery production.

The coastal area consists of plains and numerous lagoons near the estuaries of the rivers.

Based on the calculations in our business case, there is a potential for 30,000 tonnes per year of additional local feed in Ghana.

The 21 projects to implement the plan have not been conducted either due to lack of funding or delay in funding.

Existing data on the value chain were validated and updated as a baseline for the business cases.

With the exception of the tuna fisheries production, of which more than 60% is exported, fisheries production in Ghana has declined and cannot meet the demand for fish and fishery products, with a shortage estimated at 534,000 metric tonnes in 2013.

The quantity of captured tilapia from Lake Volta has also been decreasing over the last decade, which creates an extra opportunity for farmed tilapia. The Value Chain Analysis (VCA), however, illustrates that existing hatcheries cannot meet the market demand in terms of quantity and quality of fingerlings due to a lack of equipment and logistics that are not optimised.

There is also only one major local feed manufacturer (Raanan) that produces annually 25,000 tonnes of fish feed for aquaculture in Ghana. Currently, the feed mill is running at its maximum capacity.

Procedures for licences are bureaucratic and involve five to six different agencies and can take between one and two years.

Based on the results and the most urgent needs in the value chain, three business cases have been developed towards the setup of public-private partnerships (PPPs) for fish farming in Ghana.

These are local feed production, tilapia fingerlings production and farm level training, as well as education of in fish farming practices.

Youth in Akrofuom commended for taking up farming

Tanzania gets grant for projects of recovery support for biodiversity