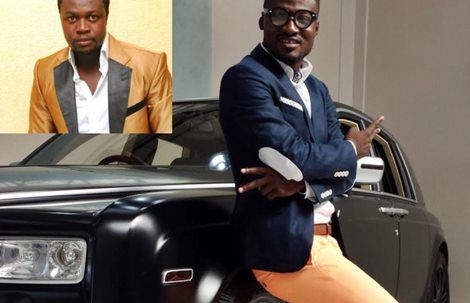 Actor turned director Eddie Nartey has expressed surprise at a recent decision by Funny Face to terminate his appointment as the director of the popular comedian?s TV series on UTV titled ?Cow & Chicken.?

Eddie Nartey has described the decision as ?strange? and explained that he had no issues with Funny Face while directing the series.

?Well, it came to me as a surprise. But hey, that is his programme. He can do whatever he likes.  I directed only the first four episodes for him. There wasn?t any agreement or contract in the first place. It was a friend doing his production and wanted me to be part and help with what I could.

?After four episodes some of my crew members called me and told me Funny Face had called them to confirm they were going on set.  I told them I didn?t know about that and that if there was the need to go on set, I was the one who would call to inform them. But later on, Funny Face called me to tell me he wanted another director to continue the job for him.

?Well like I said, it is his production so I told him, ?cool bro? all the best? and that was my last conversation with him,? he told NEWS-ONE on Sunday.

?Well, it was equally strange to me considering my input in the production. But hey, he says he wants to change director; I got no say. It?s his programme,? he added.

Eddie was reacting to NEWS-ONE?s report last week that he was sacked by Funny Face. According to the paper?s sources, Funny Face was not comfortable with how Eddie was handling affairs as the director.

It further alleged that Mr Nartey had also abandoned a movie project he was directing for fellow actor and producer Eddie Watson.

But Nartey denied he was sacked. He said what ensued between him and Funny Face wasn?t tantamount to sacking.

?First and foremost, Funny Face didn?t sack me. It?s good he has cleared it on his Instagram page and other radio platforms. I equally didn?t abandon Watson?s set as claimed in your article. We went on break. Pascaline Edwards and other members of the crew are my witnesses. The next thing I heard, Watson was directing the concluding part of the movie. I greatly helped him too much to have abandoned his production. Hence I wouldn?t want to be tagged with an unserious attitude. I am passionate and serious about what I do, especially directing, and everyone who has worked with me knows. And like I said, I don?t care about your source. I have heard even worse things Watson and other losers have said about me just to bring me down in my directing career but I won?t give anyone that chance,? Eddie said.

Prior to Eddie?s denial, Funny Face had also posted on Instagram that he only changed Eddie Nartey; he did not sack him.

?So I hear Rumours dat I have sacked EDDIE Nartey ? It?s a shame? Dat ppl can say tins to destroy friendship ? What I do?Is dat I change directors from time to time to bring varieties and different ideas. For the programme not to follow a particular pattern ? And to think of me not speaking to anybody ? Yet they do a story and include my name ? It?s a shame!! Hmmmm. GOD brought me here and he will keep me here?Today dis tomorrow dat ? Hmmm !! GOD IS IN CONTROL,? he said on Instagram.

Whatever it is, Eddie Nartey was hired as director for Funny Face?s drama series. Another person has been hired to do the same job and Eddie Nartey has been told to step aside.

Even before Eddie Nartey was told to step aside, a new director had already been contracted to do the same job; yet, Funny Face insists what happened to Eddie Nartey was not a sack but rather a change of directors