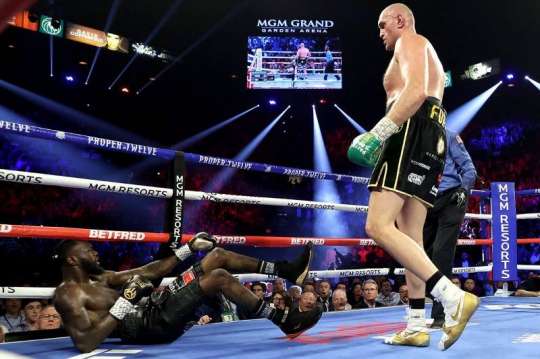 British boxer Tyson Fury also known as the “Gipsy King” made an easy fight out of Deontay Wilder to snatch the World Boxing Council (WBC) Heavyweight title from the American in a fight in the early hours of Saturday.

Fury, was dominant throughout the fight, which was the second time both boxers were meeting at the MGM Grand Arena, Las Vegas, United States of America (USA), with Wilder finding it difficult to find his rhythm in the fight.

It took series of punishments in the sixth and seventh round for the corner of Wilder to throw in the towel, capping a remarkable career comeback for the 31-year-old.

The Mancunian – who once held all four world title belts – dethroned Wladimir Klitschko back in 2015, before his time at the top of the sport was derailed by depression and addiction as he reached an estimated 27 stone.

Fury, bloodied Wilder’s ear, and seemed to lick the blood off his shoulder in a bizarre scene in the sixth round and by the start of the seventh round, another left hook hurt Wilder and all he could offer was his trademark, lazy, looping right hand.

Fury pinned him in the corner and the towel came in to anoint a new world heavyweight champion as referee Kenny Bayless stopped the fight.

Fury in a reaction to the victory said “I know he will ask for a rematch and I am ready to give him that opportunity.

Should the rematch materialises it would be the third time both boxers would be mounting the ring after the maiden one ended in a draw under controversial circumstances.

Tamne Dam overflows and destroys farmlands and houses at Tempane

All set for Dogboe to make another return on June 19th