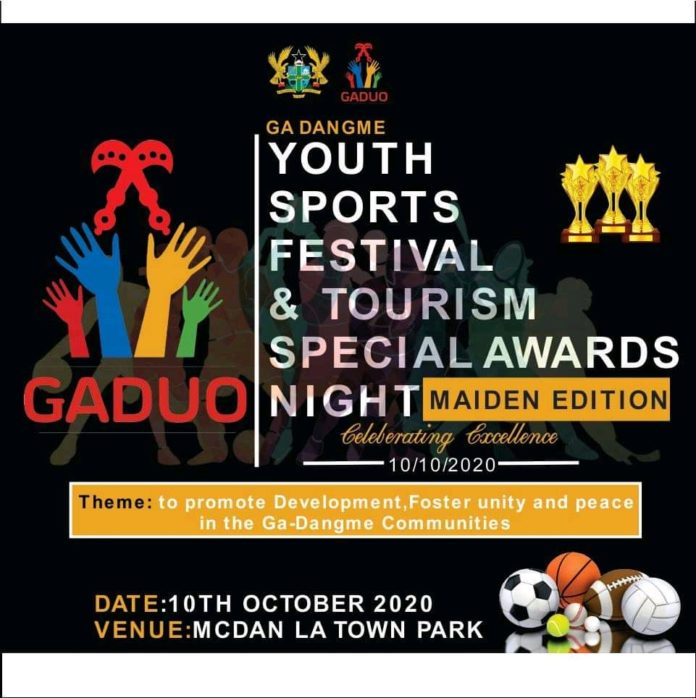 The Ga-Dangme Unity Organisation, an NGO, is set to honor deserving and supportive organizations and individuals who have in various ways provided support to the Ga-Dangme communities.

This maiden edition which is under the theme “Fostering Peace, Unity and Justice Before, During and After the 2020 General Election and Beyond” has been slated for October 10, 2020, at the Mac Dan, La Town Park, Accra at 6:00 pm.

A statement released by the organization and sighted by this portal noted that it is incumbent on every citizen to champion Peace and Cohesion.

“As part of the program, we would like to educate the public about the fact that we are in an election year; therefore, it is imperative to ensure that, as citizens, we do things that Promote Peace before, during, and after the General Election. This will ensure that in the end, the victory will be for all Ghanaians.

“Under the Auspices of the Ga-Dangme Unity Organization, resources persons will be drawn from various Political Parties, Ministry, Religious Leaders, Peace Council, and other relevant Stakeholders including Civil Society Organizations to give educational lecture on why there is the need to maintain Peace before, during and after the 2020 General Elections”, the statement added.

The awards will be herald with card competitions in the Ga Communities which include La, Nungua, GA Mashie, Kpone and others.

It has been scheduled to begin this week.

The International Youth Sports Day Activities also follows immediately with the 2nd leg of all Christians playing against all Muslims in the Greater Accra Region being played before.

The maiden event is being supported by the Coastal Development Authority(CODA).