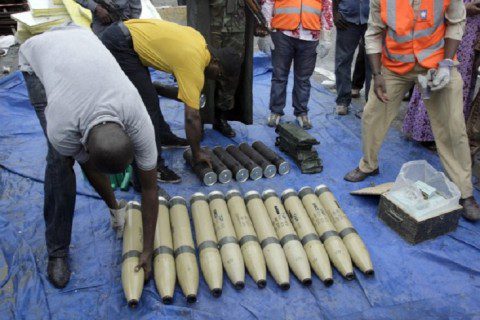 A huge cache of weapons was discovered on an uninhabited island in Gabon, the government said on Tuesday.

The weapons found on the beach of Esterias cape in northern Libreville included, machine guns, automatic pistols, rocket launchers, hand grenades, mortars and different ammunition.
Public prosecutor Sidonie Flore Ouwe said an investigation had been launched to shed more light on the origin and owners of the weapons.
On Monday, the government placed all its armed forces on high alert after receiving information of the presence of weapons along its border, with no specific location.
Tension has been rising in Gabon following the death of opposition leader Andre Mba Obame on April 12, 2015. Consequent protests have resulted in burning of the Beninese Embassy in Libreville.
Obame’s remains are expected to be repatriated from Cameroon on April 28. The government has deployed the army along the main streets to prevent possible riots. Enditem