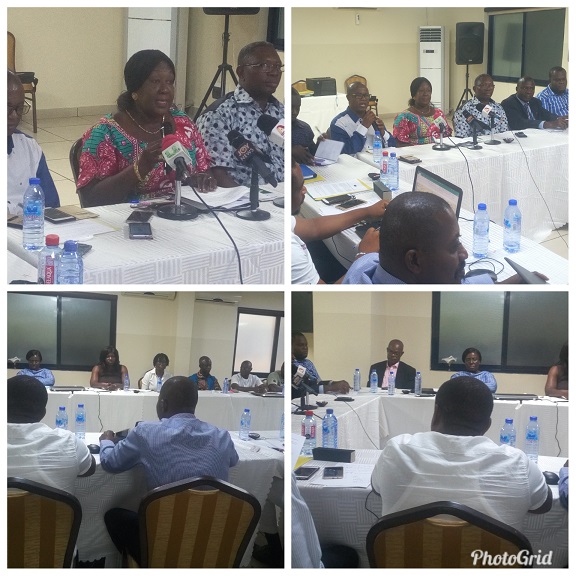 Dr. Mokowa Blay Adu-Gyamfi, the Director General of the Ghana AIDS Commission (GAC), on Wednesday 10th January, 2018, indicated at the end of a two-day annual strategic planning meeting that, the HIV/AIDS prevalence rate in the country is creeping up gradually thus, it brings to the fore the need to intensify HIV prevention alongside the “Know Your Status” and “Treat All” campaigns in the country.

The document also showed that, a total of 15,116 people died of HIV and AIDS-related illness in 2016, as the National Spectrum estimated in the country. And out of the total AIDS-related deaths, 12,585, representing 83% were adults while 2,531 representing 17% were children under 14 years.

The Commission has however, admitted the preventive education had not been effectively done enough to produce the positive result expected. In view of that, the meeting was focused on charting ways in fighting the HIV pandemic in 2018.

According to Dr. Adu-Gyamfi, the strategic objectives of GAC for the year 2018, is to ensure the availability of funding for all relevant HIV Programme, review and formulate policies towards epidemic control, achievable through the implementation of the provision of the GAC ACT 938, especially the HIV/AIDS Fund and its effective management.

She indicated, there would be a revision of the current National HIV/ AIDS and STI Policy to reflect the country’s needs and current global trends, and a continuation of the implementation of recent policies and programmes of the national response to the epidemic, adopted by the nation, such as the 90-90-90- Fast Track Target, the Treat All Policy, and the Differentiated Models of Care.

She noted that, “All these are expected to spur the nation on, in its efforts to achieve the National Strategic Plan 2016-2020 targets of reducing new infections and AIDS-related deaths.”

Adding that, the Commission and its partners would step up programmes to help prevent HIV infection through education and Prevention of Mother-to-Child Transmission and Early Infant Diagnosis, and link up those infected to care and treatment.

“The drive to minimise stigma against Persons Living with HIV (PLHIV) or those affected by it continues unabated with the Heart-to-Heart Ambassadors, though regrettably it is on a low key due to lack of resources,” she disclosed.

According to her, there had been a swing in the HIV prevalence in the regions due to the level of attention that was given to areas that had previously recorded high figures, and these had yielded positively, however the Commission would have to balance the awareness creation and other interventions in the coming years to leverage national outcomes.

Dr. Adu-Gyamfi urged persons who had tested positive of the HIV or was about to test to find out their status, to put all fears and inhibitions aside, and access treatment if they tested positive.

“We are working to find ways to make testing and treatment available to everyone by training lay counsellors and also setting up community health posts to make the service widely available to the public,” She said.

She appealed to all partners, especially the media to keep supporting the Commission in the campaigns, to reach the many persons who needs sensitisation and encouragement on stigma affecting People living with HIV (PLHIV).

Dr. Adu-Gyamfi noted the National HIV/AIDS Research Conference would be held in May 2018 to provide a platform for sharing knowledge and smart practices in HIV research and programmes, disseminate finding from relevant HIV/AIDS research as well as spread the message and encourage every individual to know their HIV status, and more importantly to seek early treatment, and also to adhere to the treatment if tested positive.

In attendance of the fruitful meeting were regional, district and national officers of the Commission and was chaired by Dr. Adu-Gyamfi, who steered the affairs of the meeting.

Over 5,700 people are living with HIV in Upper West – GAC

Create needed ambiance for women to take up leadership roles

GAC unhappy with stigmatization of people with HIV and AIDS