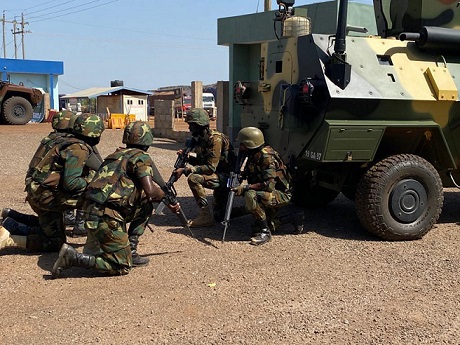 The Ghana Armed Forces (GAF) has begun Exercise Eagle Claws 2021, a counter terrorism-training programme, along the country’s border with Burkina Faso in the Upper West Region, to consolidate security….

The five-day Field Training Exercise (FTX), which started at Hamile and Wa, is on the theme: “Consolidating Security for National Development.”

It opened with a rescue mission in Wa by troops from the 69 Airborne Force and the 10 mechanised Battalion, while the 153 Armored Regiment reinforced the Hamile Border to aid the Customs and the Police to repel small arms attack.

Skills of the troops, including fire-fighting, casualty and medical evacuation, and mine detection would be tested as part of the training, which would progress across various staging areas in the northern sector.

Colonel Carl Del-Alorse, the Exercise Coordinator, said the FTX was envisioned and planned by the Military high command to test, train and prepare troops from the Army for an efficient delivery of their counter terrorism role.

The exercise would equip troops with the requisite capacity to respond rapidly and effectively to terrorists and contemporary threats.

Brigadier General Matthew Essien, the Support Services Commander of the GAF, urged participants to imbibe vital lessons from the training to enhance their capability in defending the country and its citizens form any terrorist attack.

He commended them for the resilience and professionalism in the training while applauding them for their appreciation of the theoretical aspects and impressive practical application.

Brig. Gen. Essien advised the troops to stick to the military concepts of coordination, command and control to succeed in their operations, adding that participants and units should take advantage of modern technology and weaponry to leverage effectively on their assigned tasks.

The Commander called for force protection and vigilance to ensure the success of every military operation.

Air Commodore David Akrong, the Air Force Base Commander (Tamale), and other representatives from the Military and the other security services also observed the training.