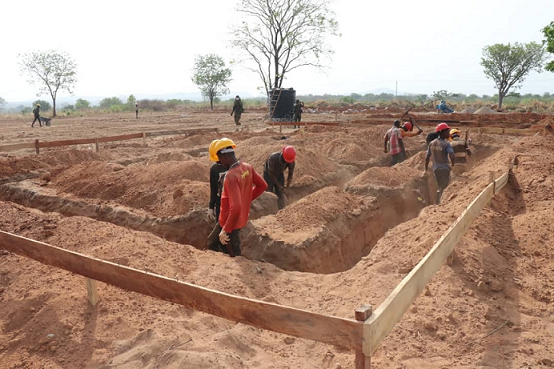 Vice Admiral Seth Amoama, the Chief of Defense Staff (CDS) has cut-the-sod for the construction of a modern Forward Moving Base (FOB) at Bui in the Ahafo Region to provide security for the Bui Power Dam and its assets.

The project, scheduled for completion in six months, comprises a troop accommodation for 150 men, a recreational area, a clinic, and an administration block, in addition to a fuel station, a square, an armoury, and a magazine.
The base would also have a bunker and an engineer store.

He said the Nation would not leave its strategic assets like the Bui hydropower station exposed in the face of the current terror threats emanating from the Sahel Region, thus the construction of the base was a “giant step” towards enhancing national security.

He commended Maj. Gen Thomas Oppong-Peprah, the Chief of the Army Staff (COAS), for envisioning the project while lauding the CEO of Bui Power Authority, Fred Oware for getting the Board and Management of the Authority to bring the project to fruition.

Vice Admiral Amoama was happy that GAF would provide the requisite security and protection for the Dam, given its socio-economic importance in the Ghanaian society.

He disclosed that the military had already deployed troops in a limited capacity on internal security operations at Dorkokyina and other adjoining areas.

The CDS said security was a shared responsibility and therefore, the community should support the military to discharge its mandate.

He appealed to other corporate organizations to emulate the example of the Bui Power Authority and assist the GAF to meet its operational, administrative and logistics requirements.

“It’s a shining example for public organizations, state institutions and bodies to support the military to perform its functions,” he stressed.

Mr Fred Oware, CEO of Bui Power Authority, revealed that management of the Authority considered security key to optimum operation of the facility, and invited the GAF, which had already conceptualized a plan as part of their internal security operations for the area, making the collaboration easier and effective.

The CEO assured the High Command of his support in ensuring that the contractor met the stipulated timelines to accord the troops with the necessary courtesies to operate professionally and effectively.

500 Trained Life Guards Pass Out, To Be Deployed On Volta Lake

Three Europeans arrested by Malian military on suspicion of terrorism