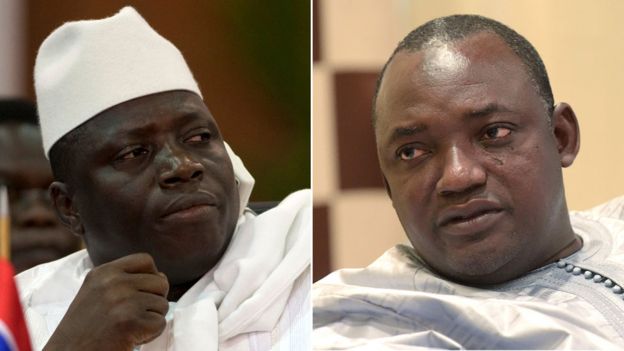 Ousted Gambian President Yahya Jammeh was flown out of his country on Friday January 20 after the military intervention of troops from neighboring Senegal and air support from the Federal Republic of Nigeria. Reports surfaced that Jammeh will be taken to Equatorial Guinea far away from his home in Gambia. The regional Economic Community of West African States (ECOWAS) had pressured Jammeh to relinquish power in the aftermath of an election in December when he was said to have been defeated by a coalition of opposition parties headed by rival candidate Adama Barrow.

Jammeh had initially accepted the results of the elections until the following week when he went on national television to challenge the authenticity of the poll claiming there were gross irregularities. The president had requested a revote and the parliament inside the country granted him a 90-day extension of office.

However, ECOWAS and their western imperialist supporters were determined to act immediately in order to remove Jammeh not only from his post but from the country. In a matter of days Senegalese troops were poised to invade with the full military support of other regional states including Nigeria and Ghana.

The events in Gambia were hailed by members of the corporate media and the government-controlled press of the western countries who framed the conflict inside the small West African state as a case of political intransigence and the suppression of democratic control. Barrow, who has been labelled as a successful “real estate developer” was installed at the Gambian embassy in Dakar, the capital of Senegal. Nonetheless, days after the removal of Jammeh, Barrow has still not entered Gamiba saying he will only return when the situation is “stable.”

The Role of AFRICOM in West Africa

The entire military, political and public relations operations utilized to remove Jammeh from the country and to inaugurate President Adama Barrow were engineered by the United States military and State Department along with leading news agencies in alliance with the British Foreign Office. Senegal, which renewed a comprehensive defense cooperation agreement with the U.S. in July 2016, has close ties with the U.S. AFRICOM was founded in February 2008 under the administration of former President George W. Bush, Jr.

During the successive Democratic Party government of former President Barack Obama, AFRICOM has been strengthened and enhanced. Joint maneuvers with African military forces, the training of troops and officers, the supply of weapons, intelligence and defense technology, has become standard practice across the continent with specific reference in the case of Gambia in the ECOWAS region.

In the Horn of Africa, Camp Lemonier has been expanded in Djibouti while drone stations and training operations conducted by the Pentagon, the State Department and the Central Intelligence Agency (CIA) are proliferating in the eastern region of the continent. Obama pledged over two years ago that Washington would deploy at least 3,500 U.S. Special Forces and trainers in over 35 African states as part of what was described as “counter-terrorism” exercises designed to improve the security capacity of African states.

Operation Flintlock in West Africa is an annual training exercise which set the stage for the current intervention in Gambia. The early 2016 operation was led by the Pentagon and included agents from the Federal Bureau of Investigation (FBI) utilizing Senegal as its base for the joint military field training in cooperation with 30 other states.

In an article published by Deutsche Welle, it says: “The operations in this year’s (2016) Flintlock exercises took a global dimension but also put much emphasis on the African regions where terrorist activities are rife. The FBI trainers grouped police officers and gendarmerie custom officers from Mauritania and Senegal in a team and gave them tactical and operational trainings.” (Feb. 29)

The U.S. Army Africa (USARAF) website reported that: “The Flintlock exercise started in 2005 across the Sahel region of Africa. Participating nations are members in the Trans-Sahara Counter-Terrorism Partnership (TSCTP) and are planned by African partner nation Special Operations Forces and Special Operations Command-Africa to develop the capacity and collaboration among African security forces to protect civilian populations.”

Another report published by the New York Times emphasized the participation of military forces from The Netherlands, which houses the International Criminal Court (ICC), along with other NATO members. This institution, the ICC, has been pre-occupied with indicting, arresting, prosecuting and imprisoning African governmental and rebel leaders. At present former Ivory Coast President Laurent Gbagbo is facing trial after he was overthrown at the aegis of French paratroopers in 2011.

African Union (AU) member-states have expressed their trepidation related the apparent racist and pro-imperialist character of the ICC. Nonetheless, the mass exodus from the institution has yet to be forthcoming.

Three states have withdrawn from the ICC being Burundi, South Africa and interestingly enough, Gambia, which is the focus of the current ECOWAS intervention. Jammeh had rejected the interference into Gambian national affairs by ECOWAS, a regional structure which remains within the orbit of former colonial powers and the U.S.

Eric Schmitt, the author of the NYT article, stressed in relationship to Operation Flintlock that: “The exercise pairs Western trainers with African partners in different outposts scattered around Senegal and Mauritania. In Senegal, for instance, Estonian alpine experts are training Senegalese Special Forces; Italian commandos are working with troops from Chad; and Austrian Special Forces are also with Senegalese soldiers. Dutch marines, who have been training with Senegalese naval forces since 2007, were a natural fit for the new riverine mission. The recent beach landing was the first phase in training that over the next two weeks will build up to a two-day simulated mission with a night landing — as the commandos would do in a real operation to preserve the element of surprise and allow more time to surveil the target.” (Feb. 15, 2016)

Allegations of corruption by the ousted Jammeh administration are now making the case for the deportation of the former leader to the Netherlands. Reuters press agency quoted a Gambian citizen “Trader Aji Jagne, 32, who had screamed ‘we are free’ until her voice was hoarse on Sunday (Jan. 22) but by the end of the day, less than 24 hours after Jammeh flew out of the country and into exile, her toothy grin had disappeared. ‘Why should he escape…? If he ever sets foot in Gambia again, we shall take him to the ICC,’ she said, referring to the International Criminal Court, from which Jammeh had planned to withdraw before his December 1 electoral defeat.” (Jan. 23)

Regime Change Agents and the Removal of Jammeh

A key aspect of overthrow of the Gambian government was a well-funded public relations campaign led by so-called non-profit organizations in cooperation with corporate media outlets and government-controlled press agencies. One such institution is Vanguard Africa which is based in the U.S.

The Atlanta-based Cable News Network (CNN) reported on January 23 that: “Jeffrey Smith is the executive director of Vanguard Africa, a nonprofit organization that provides support to pro-reform political candidates and backed Barrow’s campaign. Smith told CNN: ‘The priority right now is getting the country back on track. Gambians just want to get on with building the country back up again.’”

Smith has worked with similar operations including Robert F. Kennedy Center, Freedom House, the National Endowment for Democracy, Institute for Democratic Alternatives in South Africa (IDASA), and UNESCO. Others associated with the Vanguard Africa group includes Joe Trippi as Senior Advisor, who as explained by the organization’s website: “In 2008 helped Morgan Tsvangirai and the Movement for Democratic Change receive the most votes, and helped garner international media attention to Robert Mugabe’s democratic subversion and violence which led to a ‘unity’ government and Tsvangarai becoming Prime Minister of Zimbabwe.”

The Zimbabwe government has been a target of the imperialist states led by Britain and the U.S. since 1998 when the ruling Zimbabwe African National Union Patriotic Front (ZANU-PF) declared that it would redistribute land taken during the colonial onslaught of the late 19th century. Since 2000, when the Third Chimurenga was launched, the economy of the mineral and agricultural rich state has been strangled through a draconian sanctions regime coupled with a massive anti-President Robert Mugabe propaganda campaign seeking the leader’s overthrow and expulsion from the country.

The developments in Gambia are by no means an isolated incident prompted by the purported excesses of the Jammeh government. Just days prior to the Senegalese intervention, thousands of Europeans and other guests were residing unmolested inside the country which relies on the tourist industry for 40 percent of its national revenue. In fact it was the British Foreign Office which declared a travel advisory coupled with alarmist reports from corporate media and imperialist press agencies which led to the mass evacuation of the small state.

In Libya during 2011, it was the U.S. State Department and the western media that spread falsehoods about an imminent massacre of opposition forces in the oil-rich North African nation. The Obama administration accompanied by Britain and France set the stage for the blanket-bombing of Libya, the overthrow of the Jamahiriya system, the brutal execution of leader Col. Muammar Gaddafi and the subsequent destruction of the Libyan state. Today Libya is a source of regional instability and economic destabilization spreading throughout North and West Africa.

Ivory Coast leaders President Laurent and Simone Gbagbo are at present in the prisons of the Netherlands, in the case of the former leader, while the previous First Lady, has been railroaded through a biased court under the administration of the installed incumbent President Alassane Ouattara, and sentenced to twenty years in detention. The same fate is awaiting any other African leaders who dare to defy the dictates of western imperialism and its allies in the region.

These events will continue until the post-colonial African states break their political and economic dependency on imperialism. African unity must be based upon the sanctity of territorial sovereignty and genuine independence. Regional African military operations cannot be guided and coordinated by the Pentagon and NATO without forfeiting the inherent right to self-determination. They should be based upon the imperatives of African unity and the reconstruction of the continent on socialist development processes.