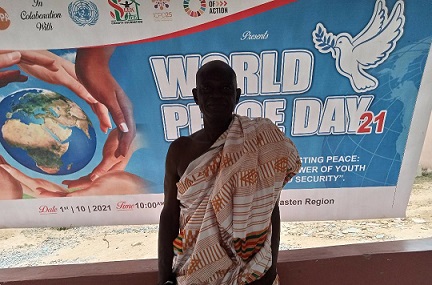 The GAP Health Aid Foundation in partnership with Seek Life Charity Foundation, has engaged the youth of Asuboi in the Ayensuano District to inspire in them the essence of maintaining peace for uninterrupted community development.

The event, which was supported by the United Nations Population Fund (UNFPA) Ghana, was part of activities to mark the 2021 International Day of Peace, on the global theme, “Recovering better for an equitable and sustainable world.”

In Ghana, the day was observed on the theme: “The road to a lasting peace: Leveraging the power of youth for peace and security.”

Basic school children, traditional authorities, representatives of political parties and young people of Asuboi participated in the event, which was heralded with a float along the streets of the town with a population of over 7000.

The floaters, clad in white attires, danced to loud music and carried placards, some of which read: “No peace no good health, we want peaceful nation, peace is everything and no peace no education”.

Addressing the gathering, Mrs Georgina Akua Padi, Executive Director, GAP Health Aid Foundation, described peace and security as essential commodities that should be patronised by every member of the community.

She said peace and security should begin at home and charged parents and guardians to often go all-out to build peaceful homes for the total and balanced development of their children.

“I always say that peace begins at home, if the home is not peaceful, and there is always rivalries and quarrels between father and mother, it affects the child,” she said, who could grow up with such violent traits in society.

She added that maintaining peace was a collective responsibility, stressing, “Peace is an essential commodity. It is the cornerstone of every nation’s development, it comes along with positive thinking, unity and the collaboration.”

She urged teachers, religious leaders, political and non-political actors to often settle on united values that would help young people to live by and nurture for generations and for sustainable socio-economic growth.

The Reverend Eric Amo, Executive Director of Seek Life Charity Foundation, a non-governmental organisation seeking to help the less privileged to have the privilege to better care and love, noted that most young people engaged in communal violence and did not have respect for the elderly anymore.

He mentioned that pockets of violence and robbery were often reported in Asuboi town and its surrounding villages, but because the Asuboi community, though with nearly 10,000 inhabitants lacked a police station, perpetrators often went unpunished.

Rev Amo said the world Peace Day celebration by the two nongovernmental organisations on 1st October was to strengthen the ideals of peace and stimulate the spirit of unity and togetherness in the youth.

He highlighted the need to continue engaging communities on peace and security matters, but noted that the two local Foundations working to maintain security in the area required support for sustainable engagement to guarantee uninterrupted local development.

The youth were advised against political fanatism and encouraged to take advantage of Ghana’s religious, cultural and traditional diversity to promote communal love and peaceful coexistence.

“Let’s continue to maintain peace and look for development, eschew partisan politics that tend to cause unnecessary and unprovoked rivalry and tension,” Nana Yaa Asantewaa, Queen Mother of Asuboi said.

She said development and peace should be the priority of all Ghanaian citizens who must avoid undercutting one another for selfish gains.

“You can’t build or stay where there is no peace. Let’s hold fast to the peace already existing to build our community,” Nana Ohene Kwadwo, the Kyedomhene of Asuboi added.

He called for individual and organisational support to complete the Asuboi Police Station to enhance peace and security.

“Asuboi has a population of over 700 and there about seven or eight adjoining communities, which are also big towns, but there is no police station, if we get a police station, it will help maintain peace and security,” he said.