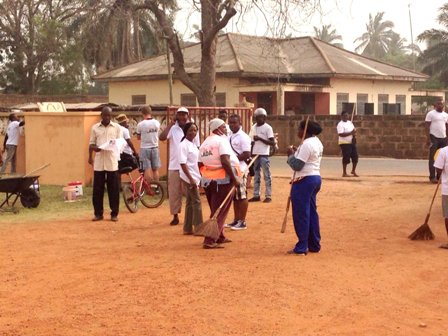 The Greater Accra Regional Minister and the Security Services have embarked on a massive clean-up exercise aimed at encouraging residents to help make the city clean.

They essentially cleaned up the big drain from Kaukudi around Nima/Maamobi slums to Paloma on the Ring road Central.

Mr Henry Quartey, the Minister, speaking at the event, said he was exceedingly glad to be supported by the various Security Services and other concerned citizens.

He expressed his hope that the MMDAs within the region would continue with the exercise from their respective jurisdictions to help make Accra the cleanest city in Africa.

Mr Quartey said the exercise was part of ‘the let’s make Accra work, sanitation project’ and that as the rains were about setting in, the event was to help drain and clean the gutters to avoid a repeat ‘June 3rd’.

On June 3, 2015, many people who were seeking shelter from a deluge at a Goil Filling Station in Accra were killed when the raging floods caught fire.

He said the areas where the exercise covered were strategic areas which could immensely enhance the smooth flow of water in the gutters.

Mr Quartey said the idea of the event was to encourage the residents continue the clean-up exercise in their homes and vicinities.

He stated that they were working towards the ‘Operation Clean your frontage in the city’ to ensure that individuals imbibed the habit of cleaning their frontages and backyards in the city.

Botswana researchers embark on exploring cleaner ways to use coal

NHFB to embark on eye screening exercise among basic schools