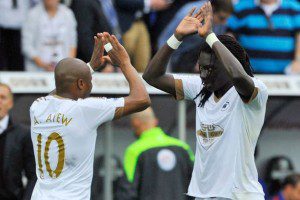 Swansea City coach Garry Monk has expressed delight over Andre Ayew?s goal against Tottenham which gave them the lead in the 2-2 in the Premier League match.

The Ghana international?s header powered in the opener for the Swans in their 2-2 drawn game on Sunday.

Swansea?s first goal was scored when winger Jefferson Montero crossed for Andre Ayew to leap and guide a header past Lloris into the corner.

The coach hints that the build-up to the goal is what his side had practised in training and he is delighted that his players replicated it in the game.

?There is a real satisfaction when something you have worked on for a long time comes off,? said Monk when asked about the goal scored by the Ghana deputy captain.

?To see the players work on the pattern and build up and take that into a game is satisfying.

?When you work hard on something in training and see the players take it out onto the pitch on a matchday, it?s a great feeling. It was a fantastic goal.?

?All credit to them. It was a terrific header and a well worked goal.?

The next match for Swansea is against Stoke City at home on Monday, October 19.