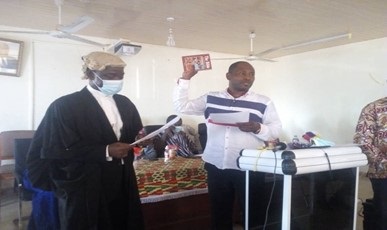 The Garu District Assembly in the Upper East Region has confirmed the President’s nominee, Mr Osman Musah, as the District Chief Executive (DCE) for the area, after the second round of voting.

Out of the 19 Assembly Members, including 13 elected and six appointed, who were present and voted, Mr Musah polled 15 votes representing 78.9 per cent, meeting the required two-thirds majority to be confirmed as DCE.

Four Assembly Members, representing 21.10 per cent, voted against his confirmation.

On October 4, 2021, when the first election was conducted after the nomination, Mr Musah failed to get confirmation after polling 10 votes and was short of the required two-thirds majority.

Mr Edward Ndazore Ndebugre, the presiding Member of the Assembly, urged members before the election to confirm the Nominee, explaining that another rejection of the nominee would be a setback for the district.

Mr Stephen Yakubu, the Regional Minister who engaged the Assembly members for close to three hours before the election, said it was important they buried their differences and prioritized the interest of the people they represented.

“The most important common interest is the development of the area irrespective of one’s political colour,” he said.

Mr Musah, in his acceptance speech, thanked the Assembly members for confirming his nomination and said his doors would be opened for ideas from members to steer the affairs of the district.

“I shall operate an open-door administration where you all shall be recognized as stakeholders and partners in the drive for the development of Garu, though we wear different party colours that should not affect our work,” he stated.