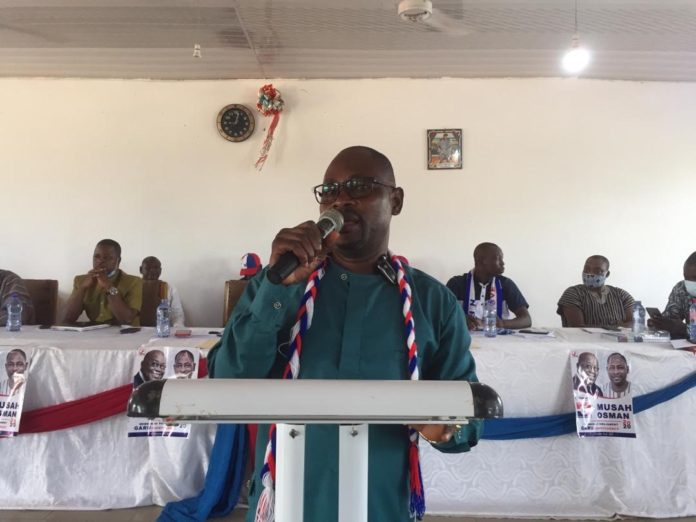 Mr Osman Musah, the 2020 New Patriotic Party (NPP) Parliamentary Candidate for the Garu Constituency in the Upper East Region has called on members of the Party in the area to bury their differences and unite ahead of the December General Elections.

The first time Parliamentary Candidate who was consumed by emotions went on his knees while pleading with leaders of the Party in the Constituency to find ways to forgive each other and work together to unseat the National Democratic Congress (NDC) who have held the seat since 1992.

Mr Musah made the appeal during the inauguration of a 29-member constituency campaign team by the NPP ahead of the December polls.

It would be recalled that after the 2019 NPP primaries where Mr Musah won against Mr Emmanuel Asore Avoka, the District Chief Executive for the area, the two and their supporters have had unresolved issues.

The problems have since then created divisions and wrangling within the Party in the Constituency, making it look fragile ahead of the general elections,

Addressing the Party delegates at the inauguration ceremony, Mr Musah who was a Programmes Officer at ActionAid Ghana, a Non-Governmental Organization, said the victory at the primaries was for the Party and not an individual and needed all to work towards taking the seat from the NDC.

He noted that the seat had been held by the NDC since the beginning of the fourth republic and the fractions within the Party in the Constituency would further distance the seat from the Party and place it firmly in the hands of the NDC.

The Parliamentary Candidate pleaded with the DCE and his supporters to forget about the primaries and prioritize the interest of the NPP so as to enable them work together for victory 2020.

Mr Anthony Anamoo, the Upper East Regional Chairman of the Party, noted that over the years the performance of the Garu Constituency in general elections had ranked third, behind Bawku Central and Navrongo Central, however, it was surprising the Party had not won the seat since 1992.

He said forgiveness after primaries has been the bane of the Party in the Constituency and urged the two parties to unite and campaign together as one unit to snatch the seat from the NDC and give true meaning to the numerous development projects being implemented by the government to improve livelihoods.

The Regional Chairman challenged the campaign team to work tirelessly and coordinate effectively with Electoral Areas and polling station campaign teams to ensure the message of the NPP sunk well with the electorates.

Mr Joseph Dindiok Kpemka, the Member of Parliament for Tempane and Deputy Minister of Justice and Attorney General who was in attendance, advised the Constituency executives to exhibit strong leadership and bring the two factions together to work for victory in the December polls.

Mr Musah faces stiff competition from Mr Albert Akuka Alalzuuga of the NDC who is the incumbent MP and Mr Dominic Azimbe Azumah, former MP for the then Garu-Tempane Constituency and Minister of State at the Office of the President during Professor Atta Mills’ regime who is contesting as an Independent Candidate after losing the NDC primaries in 2019.