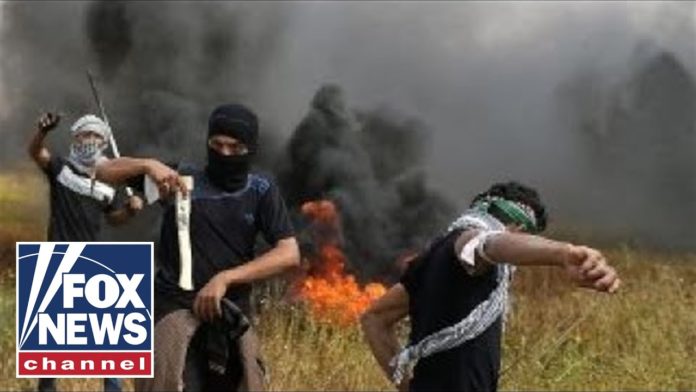 At least 30 Palestinians were injured in clashes Friday between demonstrators and Israeli soldiers in eastern Gaza Strip, according to eyewitnesses and paramedics.

Hundreds of Palestinians demonstrated and clashed with the Israeli soldiers at the border in eastern Gaza with Israel for the third consecutive Friday.

They burned tires to create a shield of a black foggy smoke. they also burned Israeli flags and raised Palestinian ones.

Eyewitnesses said that dozens of Palestinian demonstrators managed to cut part of the fence of the border between eastern Gaza Strip and Israel.

Pictures coming from the area showed them pulling parts of the barbed wire on the floor in eastern Gaza City.

The health ministry said in an official press statement that Israeli soldiers stationed at the border are targeting with live ammunition and tear gas the paramedics and the medical clinics established in the tents that were erected close to the border between eastern Gaza Strip and Israel.

Hamas and other Palestinian factions in the Gaza Strip began in March six-week rallies and called it the Great Marches of return. The marches are scheduled to continue until May 15.

The Gaza Health Ministry said that 34 Palestinians were killed, including two Hamas militants, and more than 2,800 were wounded since the start of the popular rallies on March 30. Enditem