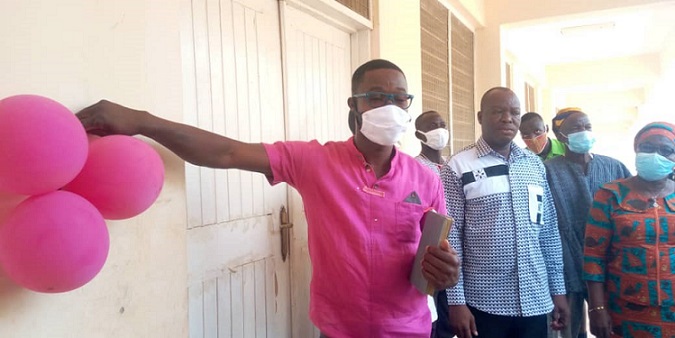 The Aide á la vulnèrabillitè, a health and charity-based group in Bolgatanga has provided electricity to a new boys’ dormitory block of the Gbeogo School for the Deaf in the Talensi District of the Upper East Region.

The Organisation, which is made of health professionals in diverse fields, through appeal for support from members of the public and their partners abroad, fixed the electricity challenge of the dormitory block which had no electricity for several years.

The GetFund constructed dormitory blocks, which were completed and handed over to the school, to relieve the crowding situation in a dilapidated old boys’ dormitory block with portions of its roof ripped-up in last year’s rains.

Mr Charles Lwanga Moandiyiem Tabase, the Chairman of the charity Organization who addressed stakeholders at a ceremony to commission the electricity for the school, noted that darkness was one of the greatest fears of persons with hearing impairment.

He said in 2019, the Organisation conducted a health needs assessment in the school, and based on their findings, they conducted medical screening exercise for students.

He said the group decided to appeal for support to fix the electricity problem and indicated that apart from the electricity challenge, they observed in their findings that the school needed an infirmary with a resident nurse to handle the health needs of the students on campus.

Mr Tabase recalled that during the health screening, “There were some students with health conditions that a resident nurse could have managed.”

He thanked members of the Aide á la vulnèrabillitè, their partners abroad and the public for their support to the school, and stressed on the need for the Talensi District Directorates of Education and Health to collaborate and provide the school with a well-equipped infirmary.

Mr Sylvester Gariba Ateo, the Assistant Headmaster of the School, appealed to the District Health Directorate to act according to the needs assessment report of the group by assisting to address its health challenges.

He said the initiative to provide electricity in the new boys’ dormitory block was timely as it came at a time management of the school found it difficult to ensure physical distancing in the dormitories.

“Management and students of the school see your support as divine intervention. God richly bless you and your donors for living by your name, Aide á la vulnèrabillitè,” Mr Ateo said.

Some students who expressed appreciation to the group in an interview with the Ghana News Agency through a sign language interpreter, said congestion would be solved for them to communicate effectively at night.

The Aide á la vulnèrabillitè, recently partnered the Centre for Child Development (CCD) and the Children’s Ministry of the Catholic Charismatic Renewal (CCR) in the Navrongo-Bolgatanga Diocese to screen street children in the Bolgatanga Municipality.