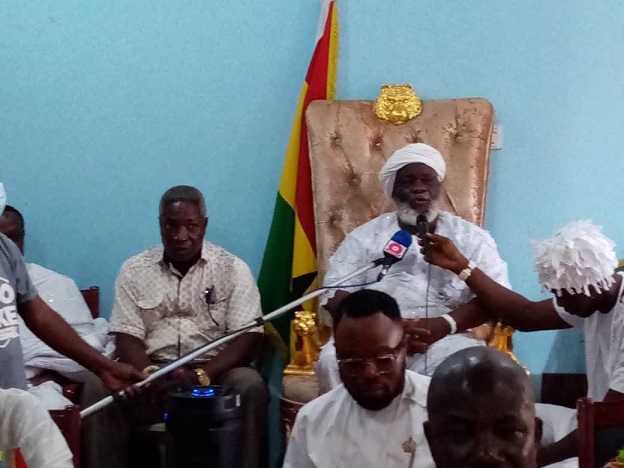 Worlumor Konor Nuumo Borketey Laweh Tsuru XXXIII, the Overland of the Gadangme State has urged the newly constituted Advisory Board of the Office of the Greater Accra Regional Chief Imam to let religious tolerance and peace be their hallmark in the performance of their duties.

He said tolerance and peace was essential to the advancement of Islam and the socio-economic growth of the country’s current state.

Gborbu Wulomo-Shitse said this when the new advisory board called on him at his Office in Nungua.
He said every individual was born uniquely and that it was by faith every individual aspired to be come a Christian a Muslim.

He said Ghanaians should not ascribe Gadangme people as converts leading to them being treated separately within the Islamic religion as the religion was opened to everybody to practise.

The Overlord said he had commenced his annual rituals of the Homowo festival activities as the Spiritual father for the entire Gadangme State within the Greater Accra region, adding, “I have done some series of sacrifices and that the coming Sunday is the arrival of the sacred corn from Oyibi to Nungua which is the hallmark of all the activities in May.”

He called on every individual within the region to participate in the celebration of the festival.

Sultan Ahmed Nii Nortey Caesar, the Executive Secretary of the Office of the Greater Accra Imam said the call was to introduce the Board to the Chief to alert him about their activities and also inform him on the path taken to promote the religion and well-being of Muslims in the region.

He said every land had its owners and that it was prudent for them to come and introduce the Board to him for his endorsement.

Sultan Caesar said the Gadangme State lived peacefully with everybody in the region and enhanced inclusiveness in everything within the region.

He added that marginalisation in everything must come to an end, adding, “ We are all one people living in the Greater Accra Region.”

Sultan Caesar said it was wrong that Ghanaians were not willing to tolerate one another because of religion and religious ideologies.

This he said Ghana was above mediocrity and pettiness and that the country must survive the religious current brouhaha.

Mr Abubakar Muhasinu Samori, the Zongo Chief of Nii Okaiman and Chairman of the Advisory Board said the Office was to serve all Muslims in the Region and that those who felt threatened by the new Board should allay their fears as they were coming to serve in the interest of everyone and to ensure the progress of Islam in the the region.

Mr Samori said there was the need for confidence between the Muslim Brotherhood to enable them to contribute to the development of Islam and the nation as a whole.

The 17-member Advisory Board was sworn into Office on May 8, 2021, which members were from various Muslim sects, tribes and Chiefs within the Greater Accra Region.

The purpose of the Board is to help steer the affairs of the Office of the Greater Accra Chief Imam and ensure the well-being of Muslims in the region.