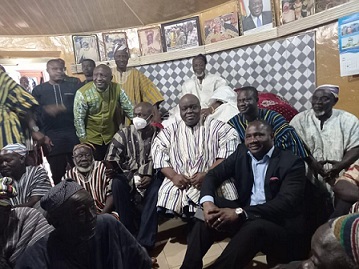 The GCB Bank Limited has donated an amount of GHC30,000 to the Dagbon Development Fund (DDF) as part of its contribution to the development of the Dagbon Traditional Area.

Mr John Kofi Adomakoh, Managing Director (MD) of GCB Bank Limited, made the donation when he led a team of staff to pay a courtesy call on the Ya-Na Abukari II, the Overlord of Dagbon, at his Palace in Yendi.

The DDF was established this year to mobilize resources to strengthen and aid the socio-economic development among the people in the traditional area.

Mr Adomakoh, in his remarks, said the visit was part of planned activities to introduce himself and interact with the Ya-Na since his assumption of office as the MD of GCB Bank Limited last year.

He said, “Our business presence is heavily here, so Dagbon is a focus area of developing the country which is at the centre of what GCB does, so, it is very important that we contribute to achieve this feat”.

The GCB Bank MD noted that the Bank was committed to supporting the growth and development of the youth, and the commercial activities in the Dagbon Traditional Area, hence, the gesture.

The Ya-Na Abukari II expressed gratitude to the GCB Bank MD and his team for the visit, and said it would strengthen the collaboration between the Bank and his Traditional Council.

He commended the donors for their kind gesture, adding that, it would help to achieve the purpose for which the DDF was established.

He appealed to other corporate organizations to emulate the effort of the GCB Bank Limited by donating to the Fund to help increase resource mobilisation to undertake planned projects that would enhance socio-economic development of the area.