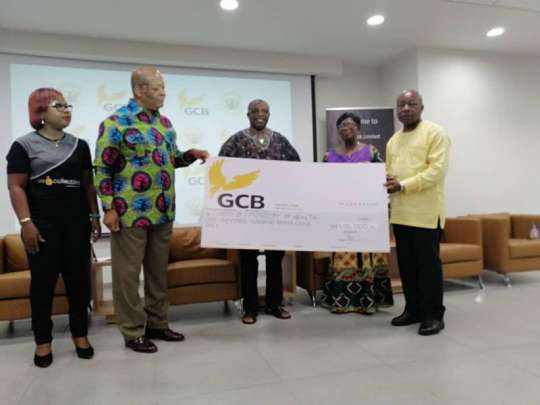 The GCB Bank Friday made a cash donation of GHS100, 000 to the Ministry of Health (MoH) to aid government’s efforts towards the fight against the spread of COVID-19.

Ghana has since Thursday, March 12, confirmed 16 cases of the respiratory disease, which has been declared a pandemic by the World Health Organisation.

Mr Anselm Ray Sowah, the Managing Director of GCB, who made the presentation, expressed the hope that the gesture would help save lives.

Ghana’s largest and indigenous bank, he said, had been following the challenges confronting the nation and the world, indeed, in the wake of the outbreak and decided to extend a helping hand.

“As the nation, the sub-region and the world, join efforts to fight the virus, it has become imperative for the GCB, your bank for life, to also augment the efforts of government to contain the disease”.

Mr Sowah said with the necessary systems put in place by Government and its partners by way of public education, the GCB with its offices and branches across the 16 regions, had also put in place measures to safeguard the health of stakeholders.

“We have set up an inter- Departmental Committee chaired by the Head of Human Resource Department with two medical officers from our medical unit to coordinate, plan and implement measures to help safeguard and enhance sustainability,” he said.

“We have procured and distributed dispensers, hand sanitizers and gloves for use by staff and customers at our head office, departments, units as well as branches and have also been educating staff and other stakeholders using our intranet, SMS, website and social media platforms,” he stated.

Mr Kwaku Agyeman-Manu, the Minister of Health, receiving the donation on behalf of the Government and the entire citizens, expressed gratitude to GCB for the gesture.

He said since the outbreak, the Government had been having series of meetings with partners for the needed support to contain and prevent the spread of the virus and the GCB had demonstrated its commitment.

Mr Agyeman-Manu expressed the hope that other institutions would emulate the gesture.
He urged Ghanaians to adhere to the precautionary measures put in place and practice frequent hand washing with soap under running water before they applied sanitizer.