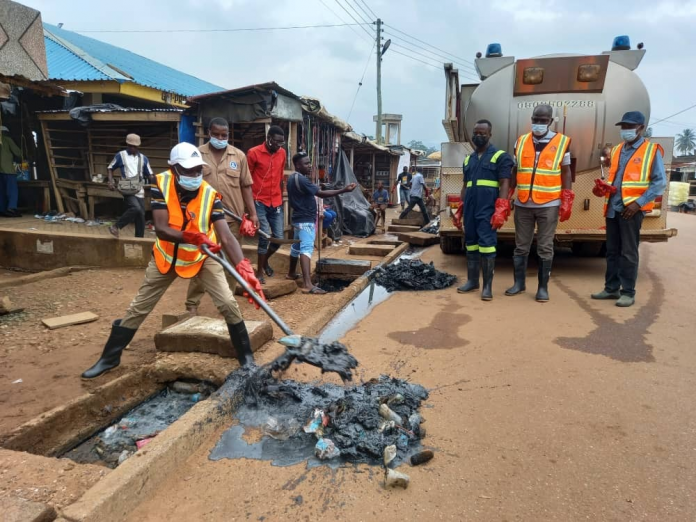 The Graphic Communications Group Limited (GCGL) and Zoomlion Ghana Limited, a waste management entity in collaboration with the Hohoe Municipal Assembly have carried out a clean-up exercise in the Municipality to ensure a hygienic environment.

The exercise also saw the distribution of 100 waste bins to individuals and organisations to improve on waste collection.

Mr Franklin Sowa, Director, Marketing and Sales, GCGL, said the exercise which formed part of the Organisation’s Sanitation Campaign was aimed at improving the behavioural change agenda believed as a requirement to improving sanitation nationwide.

He said there were clear commitments by stakeholders in the region in improving the sanitation situations of the region to maintain its cleanest city status.

The Director said there was the need for the Municipality to remain clean beyond the exercise and called on residents to take responsibility to clean the filth.

“What we are pleading to our people is that when we are able to keep our environment clean, we make life easier for all of us, we live a much healthier life, our productivity improves and there is opportunity for tourism growth.”

He described the collaboration with Zoomlion Ghana as extremely exciting which called for support of all to keep the environment clean.

Mr Solomon Denyo, Volta Regional Manager, Zoomlion Ghana Limited, noted that residents’ participation was low adding that in terms of sanitation, it involved the citizens, the government and the private sector.

He said the Company was bringing institutions on board and collaborating with the Municipal and District Assemblies to ensure the roll out of the distribution of one million bins agenda to tackle the waste at the point of generation.

The Regional Manager said Zoomlion Ghana in the near future, had an elaborate plan to go into waste circulation so that metals, plastics and other solid waste be separated into various groups, which would supply raw materials to processing plants set up in all regional capitals.

Mr Andrews Teddy Ofori, Hohoe Municipal Chief Executive (MCE), commended the exercise and said it was complementing the monthly clean-up exercise the Assembly instituted to ensure cleanliness in the Municipality.

He said the Assembly would enforce its by-laws on sanitation to sanction people, who would go against them and Assembly members would be engaged to ensure that all electoral areas in the Municipality were clean and adhering to hygienic practices.

Mr Owusu Delali, Zoomlion District Manager, Hohoe, said the district had taken delivery of a new compaction truck and the new strategy was that services of the company would be extended to other towns of District.

“We want to extend our services to Fodome, Alavanyo, Santrokofi, Likpe and Lolobi towns as part of the new strategy. We want them to also feel the presence of the one million bin distribution and in all, to improve on solid waste management and sanitation.”

Madam Christine Vinyo, leader of the Fish Sellers Association at the Hohoe Market, expressed gratitude to the organisers for the exercise which enhanced cleanliness of the market adding that they were ready to collaborate in future activities to ensure hygienic conditions of the market.