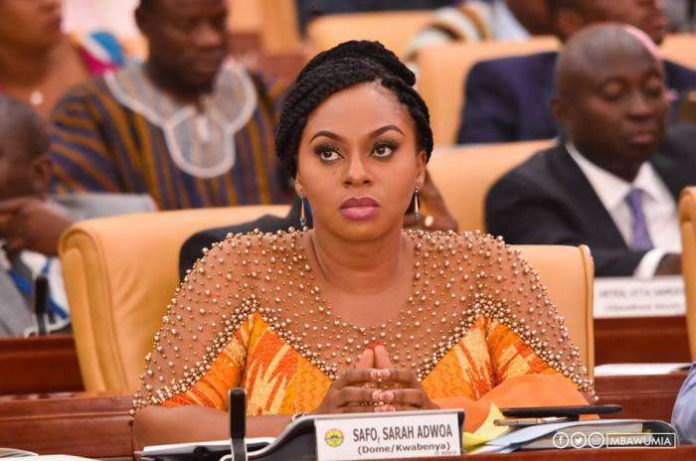 The Minister of Gender, Children and Social Protection, Hon. Sarah Adjoa Safo has been called upon by a Mother of two Children at Bawjiase ,in the Central Region,  one Ewurama Diana, who claims to had gone through extreme troubles and assaults in the hands of her estranged husband, Mr. Kofi William Adjei, a farmer, a few months ago, to come to her aid .

Ewura Diana further noted that Adjei has since neglected their kids and also subjected her to severe beatings for disagreeing with his attitude and irresponsibility towards her and their kids.

Ewura Diana, the ex-lover of Mr. Adjei who disclosed these to Newsmen at Bawjiase in an interview,  noted that Kofi as they popularly call him has been irresponsible since she got pregnant for him till she gave birth twice for him, and further stressed that it was her parents and relatives who have been taking care of her and the children with the little money she was able to mobilise herself all these while through petty trading.

She continued that she and her family have been footing all the medical bills of their two children all these while without a penny coming from their father.

According to Diana’s father Opanin Nai Opeh, the whole issue started when Kofi and his family refused to properly go through marriage procedures before the man impregnated his daughter.

Nai Opeh also stated that Kofi and his family never respected him as a father of Diana so he is unhappy about the whole issue.

Nana Opeh noted that all efforts to get Kofi’s family to perform the marital rites properly and to pay the bride price for his daughter proved futile.

According to a Pastor of the SDA Church and his wife at Suhum who intervened on behalf of Kofi to cater for the children in a telephone interview with the media, the man of Good said that they have supported the upbringing of the children and even advised Kofi to give money to Diana for the children through the Swedru Department of Social Welfare but Diana never went for the money and so they decided to discontinue to support Diana’s children because she does not respect them.  When an officer from Swedru Department of Social Welfare was contacted he confirmed that Kofi deposited money at their end but Diana did not go for it.

The said SDA Pastor at Suhum in a telephone interview with the Media also said in anger that Diana is ungrateful to him and his wife and even Kofi who he noted did a lot for Diana and their children.

Nai Opeh has appealed to the Police Unit, DOVSSU at Central Region, which is responsible for domestic violence and social protection issues to intervene to order Kofi to take care of his two children with Diana. According to Diana the matter went to Court but no solution has been found to the matter yet so it is her plea that the right authorities should intervene to put Kofi to order and on track to take care of their kids.

Mr. Adjei on his part also denied all allegations Diana levelled against him and emphasized that he has never been irresponsible to his children and also he did not assault the lady at any point in time.