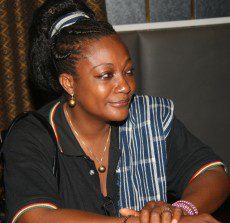 She said it was traumatising, undignified, unacceptable and a disgrace to all Ghanaians for which the act should be condemned saying that ‘enough is enough.’

Ms Djaba was speaking to the media after she visited the parents of the child at Assin Andoe in the Assin South District of the Central Region.

She said adults should be protecting children and not abusing them adding that, “the alleged perpetrator in this case is also a minor, which is delicate”.

Ms Djaba pleaded with the chiefs and the people to protect both of them until justice prevailed.

She said it was important for parents to ensure that their children were protected by exhibiting much more responsibility as most of the defilement cases were associated with family, friends and relatives of the victims.

The Gender Minister said there was the need to intensify education against child abuse, which was unacceptable, adding, “In Ghana, we turn to relegate children to the background by using the mantra that children must be seen and not heard”.

She said “children are our future leaders, our dream and we must protect their youthful age to secure them today for tomorrow, as every child must have the freedom to go to school to have a happy childhood.”

Ms Djaba said it was the duty of the police to investigate and get the court system involved and that it was only the court that had jurisdiction or power to enforce.

She pleaded with Ghanaians to be tolerant and wait for justice to take its course and urged the police to speed up their investigations for rapid response.

The Minister said every citizen belonged to the State and so whatever happened to one person affected the rest and government through the Ministry of Gender, Children and Social Protection was very keen about issues affecting the vulnerable.

She presented a cash amount GHC1, 500.00, food items and teddy birds to the father of the child to help in defraying some of the cost of the hospital bills and for the child to be playing with.

The father of the victim, Mr Kwabena Nyarko in his narration told the Minister that the mother sent the child to the Volta Region but was brought back to Accra and handed over to the Member of Parliament of the area Mr John Ntim Fordjour.

He said the mother on the day of the incident went for a programme whilst he ‘the father’ also went to a nearby town in search of food.

“On my return I met the child’s mother bathing her, but the child pleaded with her mother, not to wash her private part.”

Mr Kwabena Nyarko said when the mother asked her why, the girl told the mother the ordeal she had gone through.

According to the father, he consulted an elder about what the child said and the elder told him to exercise patience and he later took the child to the Assin Manso hospital the next morning.

He said upon seeing a doctor, they were referred to the Assin Fosu hospital and “I told the nurse that the girl was suffering from candidiasis, but the nurse refuted my claim and said we should speak the truth about what happened to her.

Mr Kwabena Nyarko said, the doctor later had a one-on-one interview with the child and she narrated what Kwabena did to her before she prescribed medications for her.