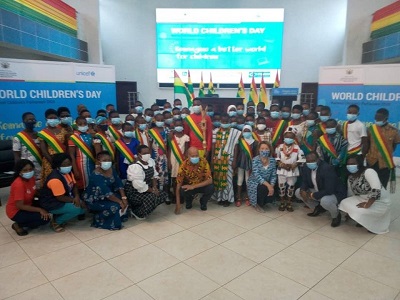 The Ministry of Gender, Children and Social Protection has organised a commemorative ceremony to mark World Children’s Day which gives stakeholders the chance to reflect on what they had done for children and look forward to improving the situation.

Mrs Florence Ayisi Quartey, Acting Director, Department of Children, who read a speech on behalf of the Gender Minister said the World Children’s Day is celebrated on November 20, to mark the signing of the convention of the rights of the child.

She said the convention on the Rights of the child is an international treaty adopted by the United Nations on November 20, 1989, establishing global standards to ensure the protection, survival, and development of all children without discrimination.

She said the country was the first to ratify the treaty and pledged to protect children from economic and sexual exploitation, violence, and other forms of abuse and to advance the rights of children to education, health care, and a decent standard of living.

Mrs Ayisi Quartey said the commemoration of the Day was further to remind the government, policymakers, and stakeholders of their key roles in translating the theme into reality.

She said the main aim of the celebration was to listen to the views and inputs of children on issues affecting their development and allowed them to highlight solutions for consideration and action.

This year’s celebration is also being used for the 2nd sitting of the National Children Parliament which was launched last year.

She said efforts had been upgraded to reduce the incidence of child marriage, female genital mutilation, child trafficking, child labour, and its worst form and also to improve access to the general public to information on the rights of children.

Adding that more children than ever had access to free compulsory basic education and free senior high school.

She said the government through Ghana Education Service had introduced Child-Friendly Safe- School programming aimed at making the school environment safe for children.

Mrs Ayisi Quartey said the health status of children had also improved with more children having access to basic health service, through social protection intervention such as LEAP, and the Ghana School Feeding Programme.

She said these interventions had supported more children directly or indirectly through their guardians to move out of poverty.

She urged the public to join the Ghana Against Child Abuse Social Drive and also to join hands to kick out abuse from the country.

The celebration was organized by the Gender Ministry in collaboration with UNICEF, Plan International, and World Vision International Ghana