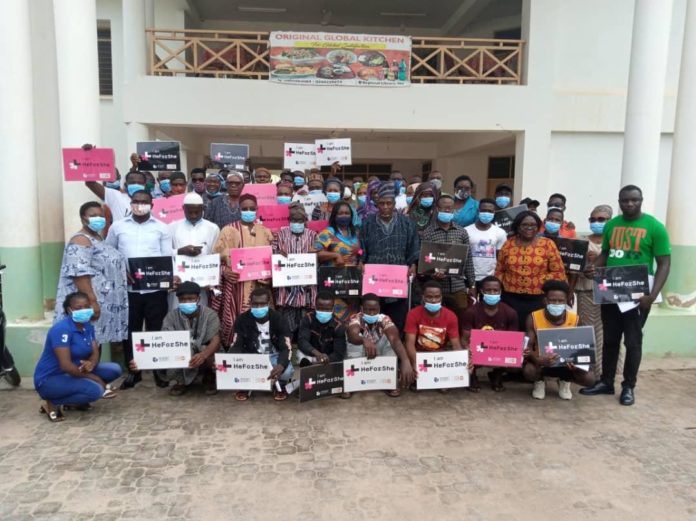 Madam Cynthia Mamle Morrison, Minister for Gender, Children and Social Protection has disclosed that the Ministry is targeting two million men and boys as advocates for the ‘He-For-She’ campaign in Ghana.

She noted that the role of men and boys in the ‘He-For-She’ campaign was critical in ensuring a just society, where women and men’s concerns formed an integral part of development.

Madam Morrison who disclosed this in a speech read on her behalf by Mrs. Thywill Eyra Kpe, the Acting National Director for Gender at a one-day sensitization meeting on the ‘He-For-She’ campaign in Wa, noted that currently, 2,445 people had signed unto the movement.

“For Ghana to achieve gender equality and also attain the set goal target of two million, we must work together to create a conducive environment where men and boys will rise in support of women and girls”, she said.

Madam Morrison noted therefore that the objective of the campaign was to promote the implementation of the Sustainable Development Goal Five (SDG 5) which was aimed at achieving gender equality and empowerment of all women and girls.

The Gender, Children and Social Protection Minister therefore encouraged all men and boys in Ghana to sign onto the ‘He-For-She’ platform to enable the country to achieve its target.

They were sensitized on gender equality specifically on ending child marriage, sexual and gender-based violence, unpaid care work and equal opportunity to all among others”, Madam Morrison emphasized.

Dr Hafiz Bin Salih, Upper West Regional Minister in a speech read on his behalf by Madam Fati Koray, a Deputy Director at the Regional Coordinating Council (RCC), noted that data had shown that majority of the violence was perpetrated by men and boys and largely against women and girls.

He said men therefore had a crucial role to play as fathers, friends, decision makers and opinion leaders in the fight against violence and the promotion of the rights of all persons particularly women and girls and ensure that gender issues were giving the attention it deserved.

Dr Jane Lobnibe, a Lecturer at the S. D. Dombo University for Business and Integrated Development Studies advised against the tendency of despising men who perpetrated gender-based violence, but rather adopt the strategy of working with them to change their attitude.

She also called on men to empower their women economically, adding that if women were empowered it would help create a better society for all.

Madam Charity Batuure, the Regional Director of the Department of Gender said after the meeting, they would continue to engage traditional authorities and their communities to inspire men to stand up and support the ‘He-For-She’ campaign.

The ‘He-For-She’ which is the first of its kind by the United Nations (UN) to galvanize as many men and boys as possible to be advocates of gender equality, had since its launch on 20th September, 2014 seen about 2.2 million people committing to the campaign globally.

The government of Ghana since December 12, 2017 launched the national campaign as part of the UN global agenda to ensure effective male involvement in the campaign for gender equality, equity and empowerment of women and girls.